But for now, let's think about this abacus without a decimal point, such that the right hand column represents "ones" --for which there are five "single counters" below plus two "five counters" above.

* When all the beads are as you see them --away from the middle bar, the count is zero.

* We can easily see how this device works for addition: move the single count beads up until you reach a value of "5", whereupon you can return those five beads to the lower bar and then move down one of the 5-count beads. When the count reaches "10", park (or "clear") all the "ones column" beads, move up the 5-count bead, then move a single lower bead in the "tens column" up to the middle bar --and so on. (Your "fingers learn" to do this in an eye-blink.)

So okay: we're good to go with addition.

~Notice that the lowest single count bead and the upper 5 count bead --appear to be redundant. The Japanese abacus doesn't even use them.

* However, now consider subtraction. Let's say you've got three single count beads up and one five count bead down in the right-hand (first) column. That equals "8". Raise one of the lower beads up in the second column and you've got a total of "18" --right?

* Now this sounds kind of stupid, since we all know that 18 minus 9 equals 9 --but that's not the point. The accomplished abacuser (abacusist?) wants his/her fingers to "know" it equals 9, and since even nimble fingers aren't real smart, they need those "redundant" beads to help them "think" and feel the counts.

* Again: adding numbers up goes well --even with the Japanese abacus, since your fingers learn to reflexively park a full count of beads in one column and then push up a bead in the next: a "no brainer".

* Back in the 1960s and earlier, a familiar entertainment was to demonstrate how an experienced person with an abacus could easily trounce his counterpart who used a mechanical calculator. While experts can speed through a column of figures with either a Japanese or a Chinese abacus (and we wouldn't want to kink their styles by changing the per column bead count), I suggest that the novice stands a better chance of achieving proficiency by having more "redundant" beads per column.

Here's that 18 minus 9 problem again, for which your fingers are able to:
~Drop out that 10 count bead.
~Keep the 18 total intact by dropping down two more 5-count beads in the right hand column.
~Then for the actual subtraction operation, move those two 5-count beads back up and out --while moving a single count bead up --such that there's a net subtraction of "9" --and lo: a 9 count value of beads remains.

* Thinking on it, we need only be able to store an 18 count in each column^ --not 20, since the next "overage" subtraction after minusing a 9 would be to minus 10, for which we just push down one bead in the next column to the left. To achieve this numerical economy, we could get by with only thirteen 5-count red beads, but we'd have to add 39 more 1-count red beads! 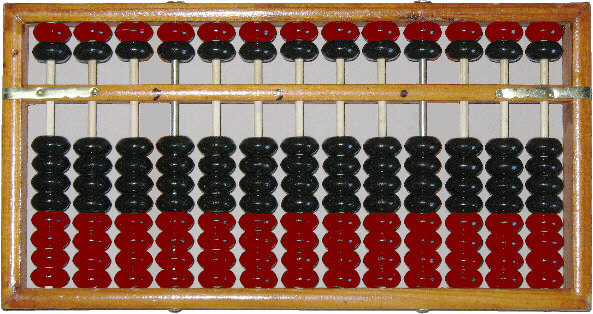 Again: the finger-thinking "redundant" beads are colored red. However --and aside from the increased size and bead count, I think that "reflexively" keeping track of 8+2 beads would be more prone to error than working the 5+3 abacus --so that's the one I made:

--by rebuilding the one you see in the earlier (PhotoShopped) photos.

** As usual, any original work on this page carries no claims of patent nor copyright.