* I'd given up on the problem. It was taking up too much time and there are 18 commercial over-the-air channels to choose from (plus library videos, more excellent YouTubes and PODcasts than I have time for). However: this past Decemberour our four Oregon Public Broadcasting channels were good for two weeks running and are now at least watchable. The snags only last a second or so. (Commercial KEZI channels 9.x here are nearly as bad.) I sent a thank you letter to OPB's administrative and engineering desks --should this have come about due to their efforts.

* Still: we endured over two years of mostly bad reception, losing time and expenses. (I bought a portable TV to help me find the interference source, but it seemed to come from the tower --even with line-of-site reception at the edge of town.

* I became a member (during a weeks long period of decent reception), sent OPB a number of letters about bad reception (3 of them with AVI video captures on CDs). They told me I was the only one complaining, which left me feeling I'd been "gaslighted". For the first 9 months of 2021 OPB's 4 channels were mostly unwatchable --like the below screen capture, but with stripes all the way, a peculiar high buzzing in the sound, or with all 4 channels blanked out. Usually, this interference repeatedly calls up that blue data /"Info" field. Our first flat screen TV would lock up. I had to unplug and reboot its operating system. This problem spanned 3 TV sets, counting the portable. One day our first flat screen TV permanently locked up and died during a severe session of OPB's signal interference). 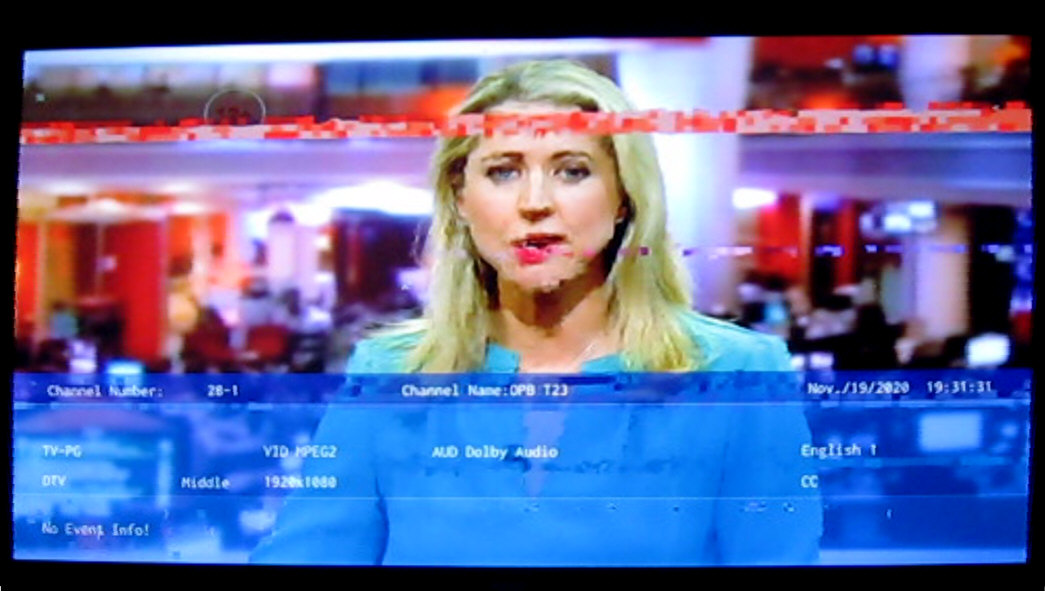 ~ The channel signal itself is always strong: 20dB over fail (using my old MATV installer's step attenuator, and as indicated above by that "Middle" strength).

* Here's a drawing of my small exploratory antenna (on a long pole), which I originally made to find out if my problems were due to interference or parasitic oscillations in our first, tiny, amplified, outdoor antenna. I walked our property to determine if location and height made much of a difference, finding that the signals were definitely stronger with elevation and with distance away from the house.

* I got good clean commercial channel signals --using just that 9 inch diameter loop of 1/16 inch bronze welding rod, a standard 75 to 300 ohm balun/transformer (that's it near the loop), and a well anchored 8 foot 2x4 (since I ended up almost within falling distance of our home's electric power cables).

* Interference troubles persisted on OPB's channels, so I went to a standard looking UHF-VHF antenna, 25 feet of RG-6 (no pre-amp) with good results: clear commercial channel reception and nearly all channels 20dB over fail.

* Most of today's TV signals are in the lower end of the UHF band, for which antennas can be small affairs (compared to those old VHF monsters --the kind that housing associations would try to outlaw with their CC&Rs). Sometimes all you need is that loop of wire --properly fed into your down lead cable. We still have one high band VHF channel here, thus our UHF-VHF antenna.

* That GE brand, "70 mile", VHF/UHF antenna is a puny looking thing, compared to the Winegard and Channel Master antennas I use to install some 30+ years ago. It cost $50 locally, which included a good J-mount and a built in balun.

* Charter^ was charging nearly $55/month here for stand-alone Internet access, and nearly $30 (each) if combined with two other services (phone and cable TV at the same rates) --for about $90/month total. Presumably, each of the other services, alone, take that higher rate. So that's what we we're saving by troubling to put up an antenna --and every month.

As for the Internet, for years we accessed it via free public WiFi --for news, email, and maintaining our 60+ web pages (which are all freely hosted at NeoCities, and for which, we've freely donated). For that 3rd service of telephone, we use a Tracfone, which costs us about $10/month --depending on use.

We had an old CDMA flip type cell Tracfone (cost something like $15), since CDMA technology use to work everywhere (even behind our big dune here), but we've since had to graduate to a ($15 again, and "triple minutes") 4G capable flip phone.  Hopefully, you have good 4G service where you live, good broadcast TV and plenty of public WiFi signal choices, but be sure that you use a friend's private (password secured) WiFi when buying stuff or doing banking. (We do zero banking via the Internet.)

According to an over-the-air/antenna reception 2020 study, 40% of US TV content viewers over 18 reported owning an antenna, up from 29% in 2019. I expect there'll be much more "cable cutting" in the near future. See: