(The above images are from Amazon.com, copyrighted by others, and supportively used here without permission)

Recently, I left the butter out, it being rather cold in the house over night. In the morning I made my wife and myself some nice toast, using halves of large hamburger buns (Franz Bakery's "Kaiser Buns") and spread them with butter. Oh my: the butter spread perfectly, plus it was cold enough to have that "melt in your mouth" great taste --the perfect temperature --and I wanted to know what that was. We have two digital thermometers (with sensor probes that I stuck into the quarter pound stick). They agreed with each other: 62.8 degrees Fahrenheit.

14 or so years ago, the much needed "Alfille Butter Wizard" (named after its inventor) was marketed --as a modern successor to regular butter dishes and the centuries old "Butter Bell". However, it had problems --which extend to the Butter Wizard not being currently available. I gather that it both heated and cooled, used a hot-side-cold-side Peltier effect TEC (thermal-electric cooling element) in its base --plus a fan, heat sink/fins and those vents to get rid of heat. Here's a video.

* Despite its cost and problems, buyer reviews at Amazon.com all gave the Wiz 4 or 5 stars on account of its essential utility, and in hopes that it would stay in production. Amazingly, there's simply been no precedent, alternative, or substitute for the Butter Wizard. 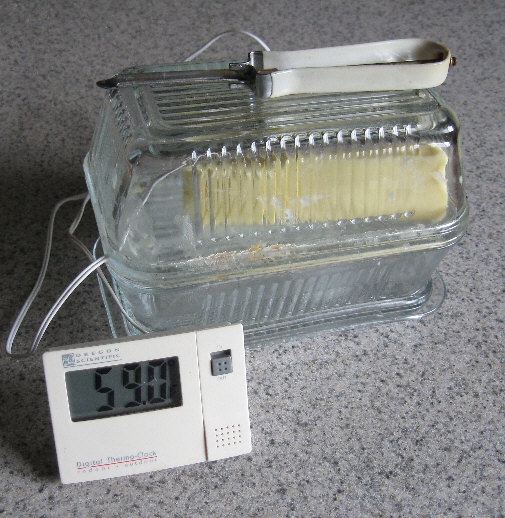 We're looking at two common butter dishes stacked together. (This common dish design is sold in the USA under the "Gem Co" brand by "Lifetime Brands" --made in China.) The lower (inverted) cover holds seven ice cubes which lasts at least 2-1/2 hours on the table in a warm room (75 degrees F.) --while maintaining the butter below 60 degrees. That lower base piece helps insulate the ice-bearing cover from the table or counter top, while catching condensation.

Since that's colder than the best spreading and tasting temperature for our regional butters (Tillamook Creamery and Umpqua brands), I use that potato peeler to shave off thin slices of butter --which works fine down to 45 degrees. (We of course keep our butter in the fridge during warm weather.)

* While cold shaved butter comes off neatly, doesn't tear the bread, and tastes as good as spreadably cool butter, there's still a bit of trouble in laying it onto a slice of cold bread --and then not letting it fall off. (Don't gesture and make points with it while talking  :-))  Butter at its coldest spreading/sticking temperature is certainly to be preferred.

* Another approach is to heat your butter knife (a regular table knife works best) say: over the toaster, then cut off and spread the "too cold" butter. A wide range of knife temperature works, since butter doesn't conduct heat very well --yet: if the butter is especially cold, you can pause the spread and warm it up. (Again: you want to spread the butter onto the toast, not melt it into the toast.)

* I can imagine a version of the Butter Wizard which mounts its (molded onto  the dish base) TEC at an open end of the dish's cover --and which neatly closes that opening when the cover is in place --such that the TEC's warm side faces outward (no doubt with stubby little fins) --perhaps only needing convection and radiation (no fan) to dissipate its heat.

* Since butter/dishes are inherently messy, both the cover and its sealed base would be hand washable.

* The user would be able to adjust the dish's thermostat up and down via five illuminated, waterproof, membrane button switches --over a narrow range (say, by whole degrees: 61, 62, 63, 64, 65) (assuming that covers the range of best temperatures for most butters).

* To keep the dish's construction and power requirements within reason, it would only cool and be rated to perform within a given range of ambient temperatures (say: 65 to 85 degrees Fahrenheit). (The power would, of course, be via an already UL approved, low voltage, plug-into-a-wall-recepticle transformer --aka: a "wall wart".)

* Presumably, the TEC's support circuitry could be configured for shut-down protection against the warm side overheating --which would be essential if its fins are to be exposed. If way too hot, the TEC's internal connections readily melt, which might be further protection against it being a fire hazard.