Children, Pets and Devices At Risk
--in closed up, parked cars.

This page recounts our own efforts to control the interior temperature of our 4 door compact car
(a Suzuki SX4) in order to keep our dog Sammy safe and comfortable while he patiently waits for us.
You're at: https://57296.neocities.org/car.htm
Use "Ctrl" and tap "+" for larger text.
last worked on: March 15th, 2018 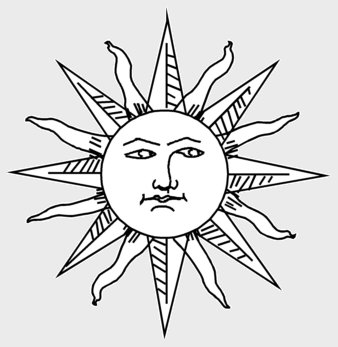 ** My first thought: it seems a do-able engineering assignment to design cars with ventilation --both low in the doors and high near the roofs, such that air convection would flow in proportion to the interior heat build up.

* But on second thought, a practical exhaust port would probably need to be integrated into the roof: low profile but wide enough to provide enough ducted convection flow, rear facing and stepped to avoid storm water incursion.

* Third thought: the most likely practical approach would be to modify the usual venitlation/exhaust system in existing cars and trucks to actively respond to an overheated interior --perhaps with energy efficient bypass fans and valves, for which the amp-hour capacity of a standard car battery would be sufficient to run it for days.

* Such a ventilation feature would eliminate that nagging compromise between leaving your car securely locked up --versus adequately ventilated. Motor vehicles should have always had such a basic safety feature.

While children should never be left in a car (and car manufacturers, ventilated or not, must be careful to stipulate that), we do see heart wrenching accounts of dead babies and pets. Passive and/or active interior cooling would surely help to prevent those tragedies.

* Presumably, this would involve a switch-off-able option for the thermostatically controlled forced ventilation, but only with a warning for doing so. Although the heat gain of a closed car can be ferocious, car interiors are a small space and modern muffin fans take very little power --compared to the capacity of a vehicle battery.

* Aside from the drain of forced ventilation, every car owner will eventually kill his/her battery or let it run down, so how about being able to switch in a second "reserve"/standby/"booster" battery --a "Godsend" feature which would in itself sell cars and even save lives.

* Another option to explore would be to run ventilation fans with solar cells or the Peltier effect (thermal couples).

"Cracking the windows a bit" is a pathetically lame way to cool a parked car.

* Several years ago, in preparation for going to our county fair --which is well inland from our west coast location and often very hot at that time of the year, I rigged a picnic type cooler chest with a medium sized 12 volt muffin fan. It had an intake port, exhaust port, and an extension cable for cigarette lighter power. 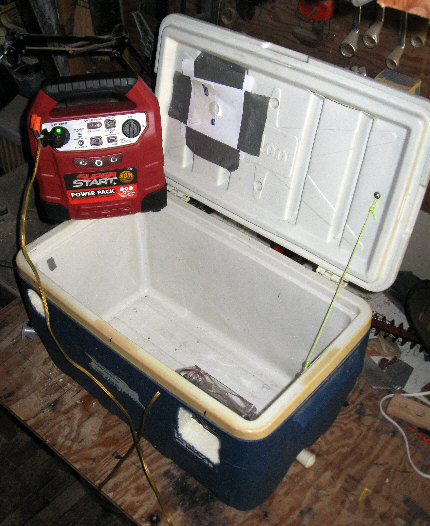 Using a wired remote sensing (home type, indoor-outdoor) thermometer, a big bag of ice in the cooler, and bowl of drinking water, I was satisfied that our dog could be kept cool and comfortable for several hours. (He actually moved a short distance away from this rig --too cold, but kept his nose near the cool exhaust.)

* Unfortunately, our next car (a bargain priced, used, 2008 Suzuki) had a lighter socket that turned off with the ignition --plus the doors can't be (electrically) locked with with accessory power left on. Consequently, we bought a "jumper box" (a lightweight portable battery unit with an internal charger) from an auto supply store --that has a cigarette lighter type receptacle (above photo). That way there's no concern about running down the car's battery. (The fan only takes half an amp).

* In order to be very sure this arrangement would work in our Suzuki, I got ready to graph the results. 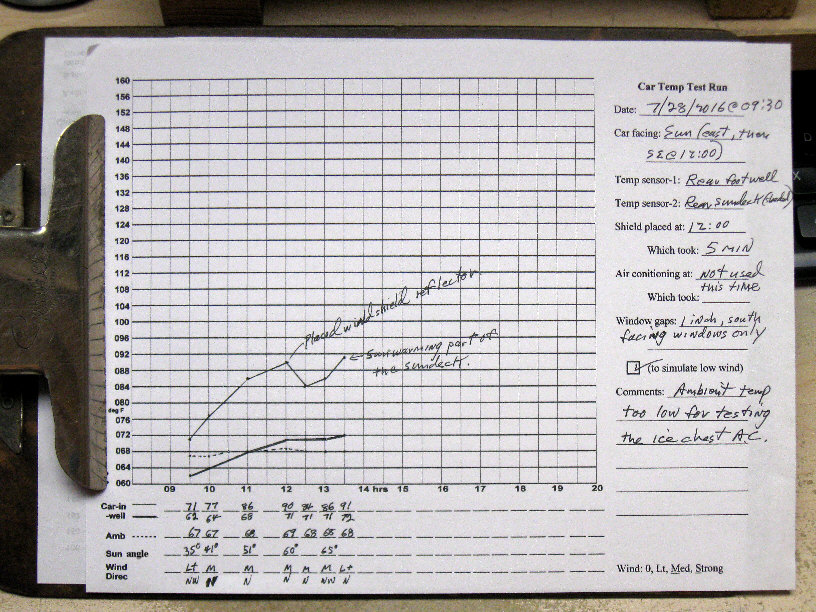 (*click* to enlarge)
* July 28, 2016: Unfortunately, our outside temperatures simply don't get "hot", plus we have gusty winds, so I thought it not worth the while to run the ice chest air conditioning test, but I did graph the windshield reflector's effect. 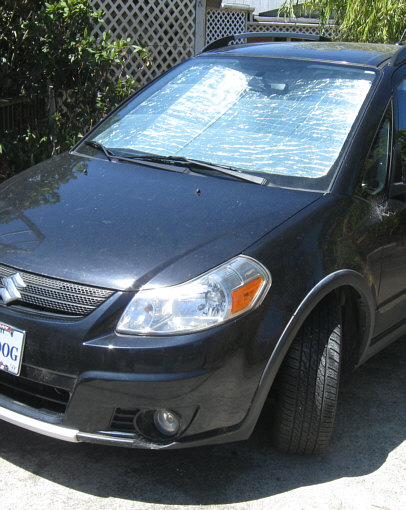 I'll add another graph or two if we ever get some hot weather and calm air here.

* If you try this idea, be sure to prove to yourself that it and your methods work (in your car) before putting a pet at risk. (We just never leave little kids alone in the car --right?) When satisfied of its effectiveness, be sure to place a clearly written notice (or two) where concerned people will see it --stating that the dog is cool and comfortable. Include your cell phone number to use --in case anyone thinks otherwise --lest some do-gooder or policeman busts a side window in order to liberate your dog.