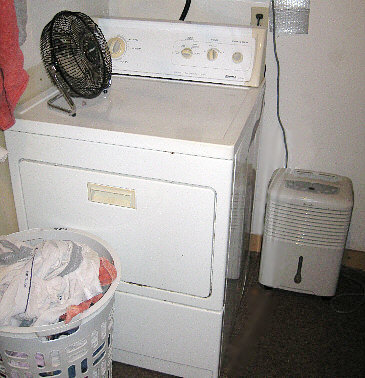 * I've submitted this idea to Oregon's Pacific Power several times, but with no response. However, after another round of Google searching and emailing to others --tah-dah:

* --there were two good responses from Northwest Energy Efficiency Alliance, which not only came to grips with what's posted here, they're well ahead of me. Reasonably fast heat pump (a dryer with an integrated dehumidifier) and even "radio wave" (microwave?) based solutions are being developed with promising test results. Whirlpool is supposed to have already marketed a "heat pump" type clothes dryer  --per:

--which (if I understand it correctly) dehumidifies forced air drawn from the tumbler drum by passing it through a refrigerated coil --no doubt to subsequently reheat that air as it passes through the compressor's condensing coils/fins --before re-entering the tumbler drum. (One might attempt to do that by ducting a conventional electric dryer --to and from a standard dehumidifier --running the drier without the heat on, of course.)

The best (so far) alternative dryer (or prototype dryer) tested out at only one kilowatt-hour(!) in order to dry 8 pounds of regular clothing, whereas my dehumidifier approach requires about 2.6 KWH of input energy. (Let's be mindful that the heat from both of those KWH figures can be retained in the household --during winter weather.)

However: the projected retail price of these new appliances might run as high as $1400, whereas the following DIY solution costs about $200. If you already own a fan and a dehumidifier, your investment cost would be for a clothes line and wall hooks --or maybe a standard folding drying rack.

* While the initial appliance cost is a big issue, the KWH input per load looms larger in the long run.

* Compared to 1 KWH cost per load for experimental dryers, eliminating the outside vent/exhaust^ is equally important. I've estimated the cost of venting a conventional dryer to be as high as one KWH per load.

The energy required to run an in-the-home, designed-to-be-ventless clothes dryer (or: a home spun clothes drying arrangement using hung laundry and a dehumidifier) subtracts from the energy required to warm your home --during the long heating season and cold nights. That could be as much as watt for watt if the drying room is in the vicinity of where you're using electric heat. (What I'm saying here: you'd be getting closer to drying your clothes for nothing.)
^Please note that eliminating the outside vent is something you do not want to do with an ordinary electric clothes dryer, and doing so could be lethal with a gas dryer.

* After reading the NEEA's responses, which cited kilowatt hours needed per 8 pounds of clothes, I realized that my original "large load" and "maximum load" laundry tub volume based numbers needed better support. I've weighed a typical, loosely packed, mixed load here at 7.2 pounds: so it turns out that I've been well within the same ball park as the NEEA's loads.

Thanks to Oregon's Pacific Power Company and our local public libraries, we can borrow a "Kill-A-Watt" device --an excellent and compact instrument which tallies kilowatt hours ("KWH"), elapsed time, spits out real time watts, volts, power factor, amps and volt-amps. (I can't think of any way it could be improved upon.)

* I grew up in Minnesota, and for 50 years it's bothered me to see clothes dryers sucking warm air out of the homes I've lived in, plus adding yet more heat at the rate of thousands of watts, only to blow it all outside through the vent.  Cold outside air must then be drawn back into the house, the resulting reduced in-home air ("plenum") pressure possibly upsetting combustion based appliances or central gas heating. 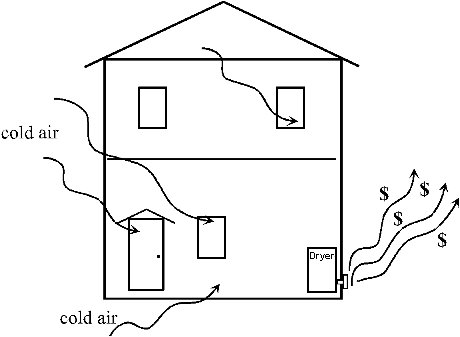 A vented clothes dryer pulling warm air out of a house

In 2012, these concerns moved me to try a new approach. I unplugged our clothes dryer (240V x 28 amps = 6720 watts), closed off its outside vent, put up 3 clothes lines in our small utility room^ (3 interior walls, floor, ceiling, entry door), added a box fan (110 watts, later a 40 watt fan) and a dehumidifier (draws 430 watts, 60 watts with the compressor cycled off, only 2 watts with the dehumidifier's fan cycled off as well).

* I set the dehumidifier's compressor to cycle off at 50% relative humidity (but I don't know what the optimum humidity setting should be --which would be some best compromise between drying speed and needlessly sucking water vapor through the interior walls and out of the house). A fresh load of hung laundry starts the utility room out over 70% RH and it reaches 50% after about 4 hours.

^ If you don't have a dedicated utility room, it's an old tradition to set up clothes lines and/or a drying rack over the bath tub. An added advantage is that, by code, the drywall panels in bathrooms are rated for high humidity.

* The total savings --dehumidifier versus our clothes dryer, would make for an interesting engineering study. My humble efforts involved determining the total cost of the air our dryer expels (see below) and estimating what thermal retention I realize as the fan and dehumidifier heat migrates into the rest of our house. A minuscule gain comes from pouring about 8 pints of collected condensate (distilled water) into our washing machine, extending the effectiveness of the detergent.

* Our older, home type clothes washer and dryer are "maximum load" models, which we use near capacity. I measured the washer's tub at 3.2 cubic feet, which I typically load with 7 to 8 pounds (dry) of mixed laundry items. Our clothes dryer took at least 40 minutes to dry such a load --for about 4.5 KWH.

* At 5 hours on the first dehumidifier test run load (heavy on towels and wash cloths), we found our dehumidified clothes quite dry, but with one towel still slightly damp.  At that point the continuously running box fan had used 0.55 KWH, while the dehumidifier's Kill-A-Watt had logged 1.97 KWH. We normally let it run for a 6th hour (which is mostly off-cycled) for an estimated 2.8 KWH total.  (9 pints of condensate this time.)

* A second test load (mostly clothes, 8 pints of extracted condensate^) was dried for 6 hours with both the dehumidifier and the fan plugged into the Kill-A-Watt.  The total logged energy: 2.55 KWH.  That's 57% of the dryer's energy, but the savings has to be better, given the (50%?) heat retention and that no heated air is exhausted.

Our (cold water) washing machine used 0.37 KWH for load #2, but during our long heating season, that simply displaces the KWH it takes to minimally heat our home. (Ditto, of course, for our centrally located old fridge and water heater.)

The worth of exhausted hot air (thanks to "Interest's" interest):

My above calculations didn't allow for the BTU or KWH cost for humidifying drawn in, dry outside air, the heating of that water vapor along with the air, nor for the expansion of outside air when heated to room temperature. Someone who does field engineering for the heating and refrigeration trade could dope that all out for us in a jiffy. (Science type guy might talk "molar weights", diatomic and adiabatic gas --*shudder*.)

So --and just trying to account for the naked air that gets sucked out of your house:

~ I turned on our dryer and it filled a 13 gallon garbage bag in one second flat. The bag was somewhat cramped for being bound to the exhaust vent, but it measured out to containing 1.8 cubic foot (13.4 gallons).

~ Then we're talking 0.01 watt-hour per cubic foot per degree centigrade (or "celsius").

~ Or 0.025 KWH per degree Fahrenheit, or: about one extra KWH if it's freezing weather outside.

Again: adding the energy cost to keep your home at 50% relative humidity --should bump that up a bit.

10/18/2017 update: I've been given a terrific tool (thanks Chuck!): a Samsung S-850 camera which has an "intervalometer" function --meaning that it can be set to automatically record a desired number of images, spaced at intervals 1 minute or more apart. So: it was time for another dryer run-- 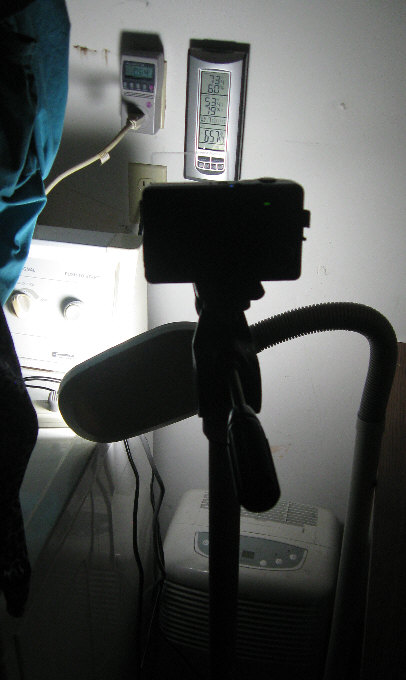 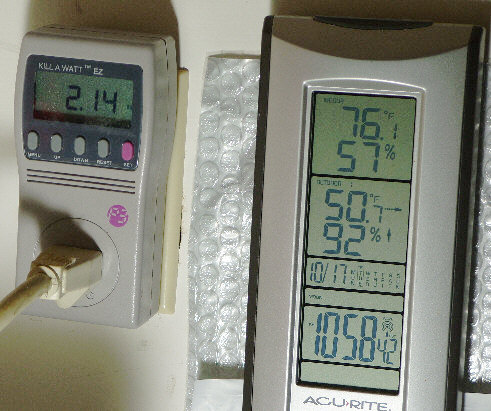 --this time monitored and graphed --per the following: 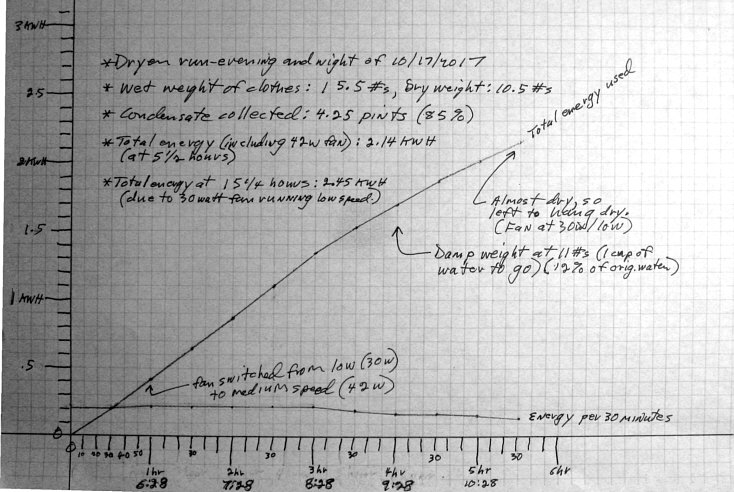 Over the past 5 years I've gotten better at hanging clothes for best drying efficiency, so we see a bit of gain here (2.55kwh previously for 8 pounds of clothes versus 2.45kwh to finish dry 10.5 pounds), but today's numbers are still similar. The dehumidifier began to cycle when going into the 4th hour, but prolonged cycling to get the last cup of water isn't very efficient --so I leave slightly damp clothes to hang dry with a fan running. It's a simple matter to add an inexpensive timer in order to terminate the run at the end of (say) hour #5. If you're using a typical mechanical timer, simply remove the "On" tab, set the "Off" tab for (say) 12 O'Clock, set the time to 7 or 6 O'Clock, then start the dehumidifier for a 5 to 6 hour run.

* Big, plush, terry cloth towels and certain clothes items hang on to their dampness more than others. Since synthetic content seems to make no difference, it must be in the weave or a finishing chemical application.

* Steve wrote: > I did the same for a "drying room" in a climbing club hut in Wales many years ago - when you came in from the hills, it's usually in wet weather gear. It used to cost $2.00 an hour to run, and generally left the clothes hot but damp. I replaced it with a refrigerator sized dehumidifier and some big-ish ceiling fans to stir things up. The running cost was then less than $0.20/hr, and the clothes generally dried in under 2 hours.

Craig: Nice work, Steve(!) and thanks for confirming this approach to drying clothes.

* "Interest" wrote: > Like this page --and I wonder how much heated air our gas dryer sucks out of our home?

Craig: Thanks for your interest, "Interest", and per your suggestion, I did an estimate of how many BTUs worth (and the kilowatt-hour equivalent) of heated home air goes out the dryer vent --against the temperature difference between outside air and heated home air --during a 40 minute dryer run. Please see above.