It all seems so amazing, astounding, fascinating, awe inspiring:

--but also a rather amoral exercise.

* Possibly, human kind's propensities for caring, stewardship and empathy (latent and sometimes expressed in other species as well), amounts to God/Nature seeking "balance" --adding moral agentry to the other side of the scale --having become weary of weighing creatures competitively against each other --"red of tooth and claw".

* Possibly, a caring "spirituality" (meaning a felt connectedness to the outcomes of one's surrounding flora and fauna) is the destination and archetype for all of life --?

(But then: why not have installed it in a perfected state from the start?)

* Origins: At this keyboarding, I've yet to Google it up whether Francis Crick (1916 - 2004) later changed his mind (or caved), but if so, I'll probably still agree with his arguments (page #51-53 and elsewhere in his 1981 book: Life Itself) --that even very basic forms of life "cannot have arisen by pure chance". What he presents appears to preclude life having arisen anywhere in, and in the known time span of the Earth -and maybe the known Universe. (No less a figure than Sir Fred Hoyle made nearly the same kind of a statement.)

* There's been (December, 2017) news on that score. Scientists from UCLA and the University of Wisconsin-Madison have (as much as) discovered the extraterrestrial origin of live --by determining that there are fossilized life forms (retrieved from western Australia), which are simply too complex to have evolved on the Earth (at that point in time). It must have evolved elsewhere and (somehow) migrated here. Consequently (and IMHO): biological life (as we know it) is likely to be distributed throughout our galaxy, and maybe the Universe.

* While I reference it for resonant inspirations and widely shared wisdom paths, I don't assign Divine authority to the (politically selected) books of the Bible, nor to any other literature held to be sacred. While we have to take very much in life on trust and authority, thoughts should ideally stand on evidence and on their own merits^.

^Making the principles and the essential infrastructure of our society widely understandable (through simplicity, clarity, transparency) -of course- facilitates the widest participation in a democracy. The alternative is a managed society.

* That said: it's hard not to intuit that Earth's (so often gratuitously and aesthetically decorated) life forms are indeed "designed", as if to make explicit that there was or is a "Designer"/Artist at work.

That be as it may, the intentions and the Nature of the Designer are surely well beyond our ken, but we can (and should) at least examine our own reactions to life.  When observing its struggle and suffering, I find it hard to imagine that, at least by our common human standards, the Designer's intentions were/are benign. 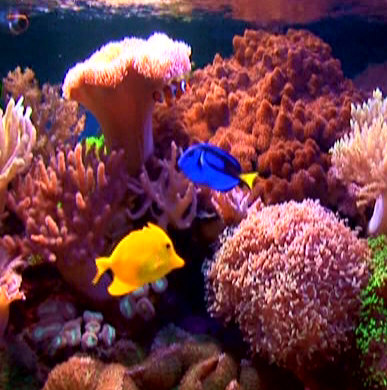 There are so many intricate biological systems and operations --even in the smallest and most basic(?) organisms, but one of the ways we get our faces rubbed into this amazing detail is through --what must be called "art" in Nature. I can imagine ETs landing on Planet Earth for a big confab and design competition, vying for ribbons in aesthetic, functional, top-of-the-food-chain and even "outrageous" categories. Is there really any excuse for some of these striking creatures --besides the vanity of out-doing one-another with their gratuitously pleasing patterns and colors?

Look at that yellow tail, stuck onto an electric blue-black body. Look at that yellow fish's tiny mouth. Were I to have engineered these creatures of the deep, they'd probably all be boringly gray and brown and look much alike --big ones eating little ones.  :-)   :-)

Each time I visit a local restaurant ("Captain's Choice") I wonder at the life forms in their huge tropical aquarium --and one fish in particular, who has a special stripe on each side. They run straight through his eyes --and as its eyes orbit a bit, that part of the stripe momentarily misaligns, one way and then the other.

I find it hard to believe --that the difficulty of assigning dark stripe pigment to the delicate tissues of the eye --and in just the right places so as to align with the body stripe --was in answer to the "natural selection" economy --the result of a rough and tumble "survival of the fittest" process. It seems more of a deeply aesthetic grace note (or maybe a hot-dogging ET maker's mark stunt).

Whatever the process or motivation behind that detail, it seems to me --to be important --and rather a duty --to notice and to witness with my humble remarks. 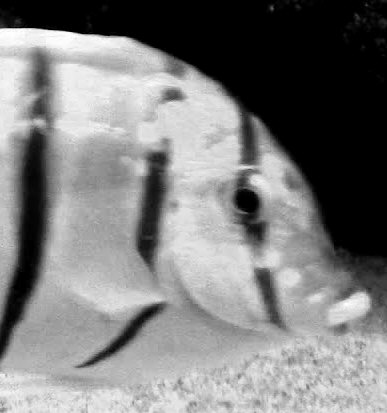