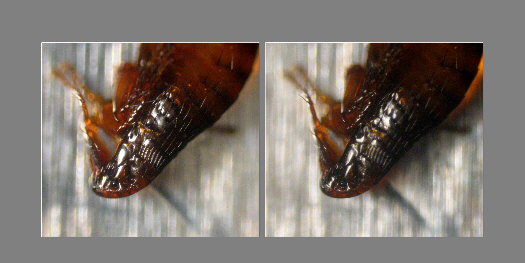 A poor stereomicrograph of a flea.

* Cats take sharp offense (and retribution) for our efforts to get rid^ of their of fleas, but then again they manage their flea populations fairly well. As such, they're largely the genesis of fleas for dogs who live on the same property.

^ Aye, and there's the rub: no matter what you do, even if you're able to inflict flea medicine on your cat/s, and seed all of your yard with nematodes (which we did --they crawl up a flea's ass and eat it from the inside out), one is never "rid" of fleas. We can only reduce the flea count.

* If you've got a co-operative cat, the product "Revolution" has worked for us in the past.

* With the price drop, we tried a "Front Line" imitating "fipronil" product again. It seemed as ineffective as ever on our dog, but maybe it was simply overwhelmed by all of our uncontrolled cat (sourced) fleas.

* The patents have run out on "Front Line Plus", and the generic product "PetArmor plus" does seem to be effective. After several days our dog's flea count was way down. However, PetArmor has since doubled in price (and so has the brand name stuff).

* However, their are now affordable Internet sources for "Capstar", which works. It only lasts a few days, but at 50 cents a capsule, that's okay.

As to both dogs and cats:

* There are $pendy pills and chewy ingestables which also work (I've heard), but (per recent feed-back on this web page from a respected source), I've been cautioned that some pets react badly. (Perhaps eating insecticide is intuitively a bad idea?)

* I've tried pills with "Capstar" content (on the advice of our dog groomer) --which is "nitenpyram". These were loose pills without documentation --probably sourced from a Florida operation which sold them at affordable prices --but the FDA has since shut them down (for the lack of them jumping through a bunch of expensive hoops. I was unable to detect the mass of their contents with a digital scale sensitive to 10 milligrams, so I'm guessing it was less than 5mg. A new source has since turned up, however. Google "Puppybutts".

The results were almost immediate. Two hours later, our dog Sammy went from having been crawling with fleas (we could easily see a dozen on his tummy) to seeing just one. Two days later, still only one (tummy count) --which I'd expect, since the house and yard (8 cats!) are loaded with fleas. On the 4th morning, no fleas. Fifth morning, 2 fleas.

Capstar is only rated to accomplish a kill-off for 24 hours, while what's needed is a month or two of killing to make an in-road on your property's flea population. It takes grams of nitenpyram to kill a dog or cat, but only micro or nanograms to kill fleas and other invertebrates, so the stuff seems to be safe for our pets --in the milligram amounts required.

* Like the vast majority of dog owners, we sleep with our dog Sammy --who's on top of the spread, but often sharing our pillows^. To the best of our knowledge, we've not been bitten by his (sometimes myriad) fleas. When I had inside house (and bed) cats (for over 60 years) --again: no flea bites. I've read that it's generally the case that fleas will not migrate to pet owners. On the other hand, I've heard accounts of individuals who do attract their pet's fleas, and accounts of flea infested carpets --from which hoards of fleas attack anyone who walks across. (Time to rent a carpet cleaner!)

^ We roll around too much for him, so Sammy's taken to sleeping on a little couch that's next to our bed. He waits to be tucked in and kissed good-night.

I'm here to tell you that department store and pet shop sourced "Advantage" and "Front Line", and a groomer sourced "Spot on" type product --did not work for us.

The product "Revolution" has worked^ well in the past. This last time our dog's fleas were visually gone by the 4th day --and I don't think that had much to do with me (carefully!) vacuuming dozens of them off of his tummy. (Again: "Frontline Plus" generics also seem effective.)

The problem is in sourcing Revolution (about $25 for one milliliter --enough for a 35 pound dog). We got ours from a local spay and neuter clinic ("S/Nips"), but it's not otherwise available in this area. Also: for a first application (thereafter, again each year), a test for heart worm is required (another $40 to $50).

The patent on Frontline Plus' ingredients (sold by the Merial Limited corporation) has expired, so the price for competing products fell, but then it went up again (in early 2018). I'm seeing $25 for 3 one month doses and twice that for a brand name product. Look for "fipronil - 9% and (S)-methoprene - 8.8% (or something like what the Frontline Plus product contains).

^ Again: "it works" only means fewer fleas --which might take a few days. I gather that the method of operation for most of these substances is: the flea jumps onto the dog, the flea bites the dog, the flea can no longer lay fertile eggs --and mama flea soon dies. So after the application, don't worry about keeping your dog clear of places he picks up fleas (like under the bed and behind the couch) because he's the killing agent --a walking death trap for them. Eventually, your dog critter would get them all --except that there's an infinite supply outside where he plays and where you-all go for dog walks --and especially if you have cats (like we do). (When using "Revolution", we only saw a few zombie dead fleas on our dog after a few days.)

* As to baths, sprays, "organic" and "natural" substances --I've had absolutely no luck --even after the great treatment our dog gets at the groomer's --and it's suicidal to bathe or spray your cat. I've also got a great collection of useless health food store sourced oils here.

** Moreover: you can find respectable opinion that most dogs simply don't need baths.

* I know a person who uses a "Natural Care Plus" cedar oil spray product from Walmart (the spray, not the shampoo) and reports good results. However, her technique is to spray it on --brush it in (rubber tipped brush bristles) --and leave it in (hmmnnnn). I recall reading about a cedar oil product, and that this is the way it's used (with reported good results) --but can it be a problem for your dog's skin? And what about your poor dog's sense of smell (4000 to 1,000,000 times more sensitive than ours).

* Flea combing, --really assiduous combing at least works initially. Get one of the new combs with a double row of dull tipped tines and work with a nearby shallow bowl of soapy water --so you can bang the comb on the bowl's edge to knock off the fleas. (Take care that your dog doesn't lap up any soap water!) My impression, however, is that you slowly but surely evolve newer generations of faster, jumpier fleas which learn how to slip through the tines and not get caught.

* Empty the bowl and flush them down the toilet. The soap/detergent disables but doesn't seem to really kill them, so some will manage to crawl back out of a common sink drain. (Sort of a zombie flea horror movie thing.)

* Here's another approach which "works": 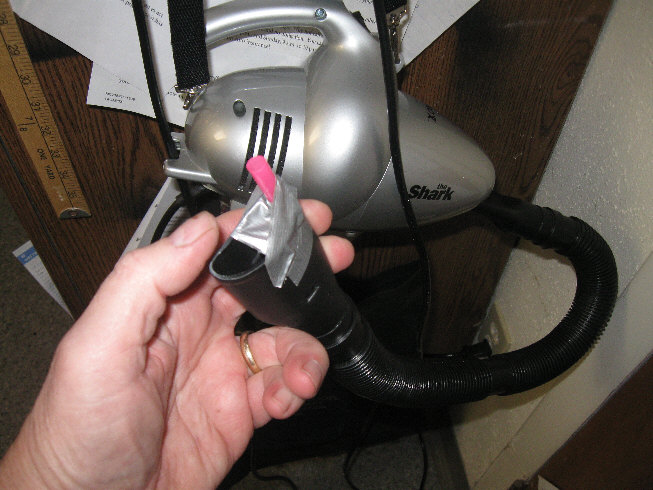 --and at least gives you the satisfaction of nailing all the fleas you can see. Don't do this if the vacuum frightens your dog. (Ours doesn't mind noise at all and seems to like the attention --although he was wary at first.) Be very careful to avoid ears, eyes and sensitive areas. Don't let your kids do it.

I turn Sammy dog over, then go after the easily seen fleas on his lower chest, and tummy (tickles him a bit). This leaves many fleas elsewhere, but they'll in turn migrate to his warm tummy so I can get them next session. I caught a caboodle of fleas, eggs and flea poop this way, but didn't use this approach long enough to claim that it actually makes much long term progress. Our dog has such a dense crop of hair (other than on his tummy) that it's hard to see his skin at all --let alone any hiding fleas.

Put your thumb on the big hole to generate ferocious vacuum and air velocity through the straw, but otherwise keep your thumb off --so that the vacuum's motor doesn't overheat. Again: please stay well clear of your dog's face, eyes and ears! Keep your sessions short. Don't obsess about "getting them all" or "just one more" since more fleas will jump out of the carpet, the lawn and onto your dog in just a few minutes.

* No: the vacuum's small brush attachment doesn't work. Sometimes even the fat (1/4 inch diameter) soda straw seems barely up to the task --especially when going after wise old fleas.

On this page I speak from life (argghhhh!). It's been decades of fleas, dogs and cats here ("Flea Nation!"), but I held off fielding a web page until I at least had a couple of items to offer which "work/ed".

* That same "holding off" goes for ants, but I'm about 2 years new to this battle. My ants are the tiny ones --takes reading glasses just to see them. They're about 2 millimeters long. Some call them "crazy ants" because they seem to go nuts when you disturb their immediate environment.

* Yes I tried with (laundry type) borax (1-1/2 cup warm water, 1/2 cup sugar, 1-1/2 tbsp borax --but borax based Terro seems to use more sugar). That worked, with hoards of ants enthusiastically gathering around --to eat and carry it back to the colony. (I feel sorry for those hard working little guys^.) That colony and two previous ones died off, each time it took about a week (while I vacuumed up hundreds of their scouts and worked to improve the caulking, inside and out). However, this year a new group showed up, who seemed uninterested in my poisoned sugar water.

* Let's make this story short. I broke down and bought a gallon size bottle of Ortho (brand), indoor/outdoor "Home Defense" (has a comes-with electric sprayer, batteries included) --and nuked them. I didn't follow the instructions to wet down a 3 foot wide swath around the house, Just did their active outside paths and inside where they were coming in. That stopped them, and it's supposed to last "up to" 12 months.

^ When I was 3 to 8 years old, my eyes could focus on the end of my nose --almost like having a microscope. I told my Mom when ants (running across the floor in my grandparents' brown stone home) were "laughing" and what color their eyes. Having accidentally killed one, I started picking it up and another ant immediately ran out beneath his comrad's dangling body. Standing tall on his hind legs and waving his fore legs, he was clearly asking me to return the body. When I carefully lowered it to within his reach, he carried it home. (It haunts me when I have to kill them off.)