Just north of Virginia Avenue, hemmed in by an expanding airport, trash dumpsters, corrugated metal barriers, industries, and overflow parking; the City of North Bend turns its back on Pony Slough and its abundant wildlife.

(Perspective: the airport will only grow and every part of the Earth we over-run with pavement and buildings is a lost treasure. My concern with what's being lost isn't so much about this particular scene, but with growth in general --which is another topic, so let's just talk about the sanderlings here.)

(This map was rendered by DeLorme's excellent "Topo USA" application)

My wife Peggy, my friend Chuck and I have long wondered at such miracles of nature as the continental migrations of fluttering butterflies and moths, the ability of Oregon slugs to find food, the biological minimalism of jellyfish, the scale of a little spider's web, the ability of a flying bug --almost too small for us to see --to navigate in 3 dimensions, maintain extended flight, identify targets/food, and replicate itself.

No less astounding is the apparent linkage among schools of fish and flocks of birds --especially sanderlings and starlings, that they should all turn as one, and often in a rapid series of impromptu turns which defy any explanation of a leader barking out orders. 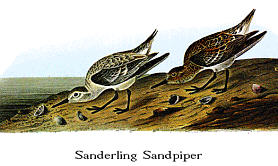 After years in want of enough time and opportunity to do so, I spotted my quarry in May of 2002: two large flocks of sanderlings --apparently gathering for the mating season, in and around Pony Slough. They appeared as the tide came in --to hunt critters in the mud --possibly by spotting bubbles. When they flew together, the flock would flash their white underbellies, then their dark top plumage. The window of opportunity lasted little more than a week --and never a camera handy --then nothing more --for a whole year.

However, in 2003 I caught them on video tape --apparently on the very last day of an ascension event. They seemed to know what it was I wanted to see: a series of high performance "S" turns, then they performed a classic climb high into the sky --to disappear, even as seen through my binoculars. I got the impression that they actually flew into and above the clouds. (16 years along now, my 2003 videos look small and grainy, so I suggest similar YouTube videos (linked above) instead --such as this one (about starlings):

For more about Sanderlings and synchronized flight, Google for Wikipedia entries.

Observers have reported seeing this ascent in the form of a massed spiral of birds --as if carried aloft by a slow tornado. What I saw was more like a mad cap frolic --a flying circus (probably due to my near vertical perspective). I felt so privileged to witness this Sandpiper celebration of life.

Here are the best stills we were able to get (and sorry about the gray day low contrast). 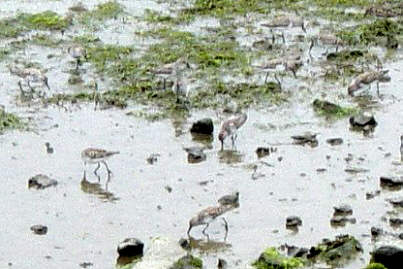