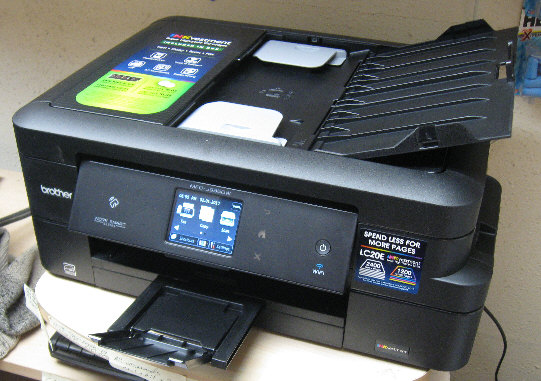 The Brother MFC-J985DW all-in-one
It has a tilting touch display panel, an automatic document feeder and internal, effortless, 2-sided printing.

4/13/2020: * The black cartridge ran out --and I had no new ink carts on hand.  Fortunately, the Corona virus pandemic hasn't killed off our Staples store, so I'm up and running again.

* I have to admit that, upon close examination (a magnifying lens at 6 inchs) my J985DW is not up to the mark set by a Canon Pixma MG8100 printer (which a fellow stereographer uses) --for sharp image detail and freedom from "image structure" (the dither grain visible in smooth areas). Never-the-less, this printer is reliable and its photo output otherwise looks great. Another factor: both Epson's and Canon's current 6 ink models (like the TS8320 --only $120), are said to go through their ink supplies rather fast) --and: the 8320 won't work with my XP-3 Windows operating system. So: that's that.

1/3/2018: It's been a year and cases of paper --until I finally had to replace the black ink tank (yesterday) in my Brother brand printer. After 8 months, 2 cases plain paper, dozens of photo quality prints, I had to replace the first of the 3 color tanks ("Can no longer print color, replace the cyan cartridge" said the display).

I was concerned about this eventuality because my owner's manual was vague about low ink, when and how to replace the cartridges. But it's not to worry! The messages not only told me when and how (with pictures and at my own speed), but I got such an in-time message for each cartridge.  You get a "low ink" warning long (maybe months) in advance. Buy some ink cartiridges, but wait for the "replace cartridge" message for each color. You don't have to worry about a print head drying out or losing its prime (if you have a new set of cartiridges on hand).

6/2/2019: 18 months later, the yellow cartridge finally ran out of ink, and it was the same story: this printer walked me through the 4 short steps. 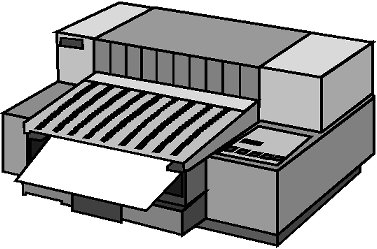 * The dot-matrix printer days ended for me when I bought my first HP inkjet: a monochrome model #500 which took big old #45 black ink cartridges and seemed like such a God-send (about 1991). After that I bought a series of ever improving, always compatible and always reliable HP Printers --ending February 1st, 2017 when I took two of my (9 years old?) HP-1510s to the Goodwill store plus I trash canned an ink leaking 3rd. The price of genuine HP ink cartridges kept going up and somehow, despite being off-line, my 1510s kept getting sassier (in their scrolling messages) about finding reasons to reject my refilled cartridges.

The past two years I'd been putting (bulk purchased) black ink into the CMY color cartridge as well --and just forgetting about color. That worked well enough as to draw compliments (I do stereography), but after foolishly buying another brand when I couldn't find bottles of Stratitec (brand) bulk ink via Amazon.com, I ended up with a mess (literally) of cartridges that kept clogging up.

So at long last, I'd finally had quite enough of Hewlett-Packard and of refilling my own cartridges.

* Fortunately, and perhaps thanks to chiding by Consumer Reports, the printer companies have started breaking ranks. Epson marketed the "Eco-Tank" series with anywhere from 5000 to 11,000 sheet capacities between affordable ($50/set or so) refills --so it's a penny or less per print (Yay!!). While their 2550 uses regular inks, the spendier models (3600, 4500, 4550) use more waterproof "pigment" type inks (at least for the black). Unfortunately, I found the (all-in-one) 3600 was priced at about $400, but it comes with (an estimated average user's) two years worth of ink --which might otherwise have cost over $1000, parceled out in typically stingy little cartridges.

Tah-dah(!): Brother (brand) has now fielded their own economical all-in-one: the MFC-J985DW for (I think) about $200 --except that I found it on sale at Staples for only $150 (Yay!!). It comes with 2400 black ink pages and 1200 color pages worth of ink in its tanks --which pencils out to only a penny a page black and a nickel a page color (or less if draft/fast quality satisfies). This printer is very well behaved and much faster than my old HPs. Photo print-outs look really good (using premium mat paper) and I see that some rate it above average in that respect. (Others think the colors are a bit too warm.)

** Before you install this printer --especially if onto an XP operated computer, be sure of two things:

~ Make sure your operating system is up to date (with service pack 3 for an XP) and that all programs (including your anti-virus/everything) are as up to date as you care to go. (Our XPs are strictly off-line.)

~ Especially for XP operated computers, establish a "system restore point" --before you try to install this printer. Unlike my old HP printers, I see no "uninstall" on the install CD. Nor do I see any mention of "Brother" on the Remove Programs list (after installation). However: optioning a restore point just 3 hours before my earliest installation attempt brought everything nicely back.

** I also installed this printer to our Vista operated laptop, and that went without a hitch (no error warnings) --but I do suggest clicking on the initial "Next" button quickly --after plugging in the USB cable --lest the computer's auto-install ("plug and play") tries to take over. The Vista install took an ungodly long time, so just relax and wait. There are long periods when nothing seems to be happening.

So far, I see these three downsides.

1) * The install (to my old XP-3 operated computer, which Brother lists as being supported) was frought with perils and went very slow. My computer laboriously built a "Framework 4 Setup" from within which the install program seems to operate. (The Vista install displayed nothing about "Framework 4".) After that the XP-3 install process was a heckuva rough cob with plenty of "Exception", "error", "cancel", "re-install", "can't see the printer --fix the USB connection" type alerts. There was even some sort of a "Visual C++" warning. Steeped in decades of such Microsoft BS, I simply "X'd" or "Canceled" my way through the alerts. (However: take care not to -somehow- cancel the installation itself.)

* Yes: I followed the install instructions religiously (and as to when to connect the printer's USB cable). Then I went back to a restore point in order to accomplish an uninstall, and then carefully tried another install --but I got the exact same results. (I was taking notes along the way.)

* Each time I got a good install and the printer ran fine --although maybe it didn't register so great with the operating system. At each computer start-up or reboot I get a problem alert (which I just "X" out) upon printing for the first time. (Again: there were no problems with the Vista install and, be my guess, later O/Ss will go along just fine.)

* I also tried the work-around of taking a (restore pointed) fresh start and letting my XP-3 operating system do the installation, but that simply didn't work. It could not find any drivers on the install CD. (Perhaps they're buried in machine code.)

* To avoid multiple error alerts (only when installing to XP-3), the final work-around was to let the three MS "Found new hardware" alerts play out (without the install CD in place). When they fail to find any drivers, check the option: "Don't ask me about this again." After that you still get a single "defective USB" alert, but only for the first print of the day's run.

* It's also my guess that if an Epson or a Hewlett-Packard  printer states that it's compatible with an XP-3 operating system (and you faithfully follow the install steps), all would go well (if slowly).

2) Alert: my local Staples store only stands behind this printer for 14 days(!) --after which I'd be dealing with Brother-USA for any warranty return claims. Save the box, packing and receipt.

3) Though not really a downside (unless Brother jacks up their ink tank prices), you do not want to be using 3rd party inks with this printer. Unlike my HP-1510's cartridges (each one comes with its own print head), if you clog up the internal heads of a tank type printer, you're done --and: it's your fault.

* My goodness but this Brother printer has a lot of doors, hinges, locks, releases, slides --adjustable parts which accommodate various papers and envelopes. Down right intricate, it is --and must have taken a million dollars worth of precision engineering!