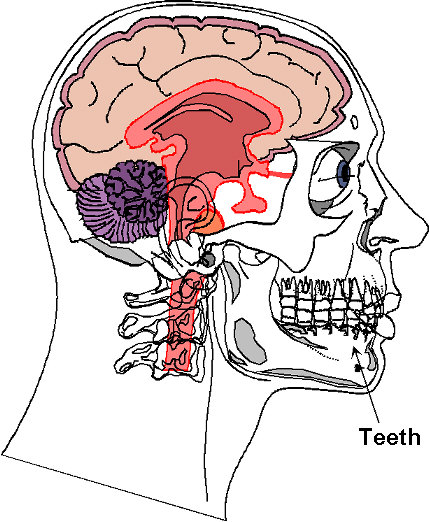 1/11/2021: * 14 months ago my remaining teeth were extracted. The dentist was very skilled and it went well. My suffering, at long last, came to an end, the heeling didn't take long, and I have no regrets. My dentist offered to make me a set of dentures for about $3000 and a denturist bid the job at $1600, but I put it off --wanting my gums to thoroughly heel and compact, but also to find out if I could live without teeth.

--as has my wife --for 60 years. (She has an ancient set of dentures, but they're only for formal photographs.)

* My gums are tough enough for chicken nuggets ("Mar Far Chicken" at Tai's Dynasty), hamburgers and such. Eating more than 2 slices of pizza leaves my gums feeling a bit beat up. Onions and other veggies should be diced (so: McDonalds, not Burger King).

* I was concerned that a "TMJ" click in my right jaw joint would be a problem, but it's remained just a click.

Much earlier writ:
* At age 76, I have rotten teeth --which is 3rd world "normal". I get them pulled, one at a time when the pain won't go away. A previous dental clinic quoted $2500 to save just one of them (meaning: a root canal and maintaining it as a dead tooth). That same dentist office was charging about $250 (with X-ray and such) for the extraction. More recently, I found a local branch of a dental chain which does extractions for about $100, doesn't try to up-sell me on expensive work, and their dentist seems skilled at extracting teeth with minimal pain. They seemed rather keen, however, on making a dental "plan" of future work and dentures --about $2000 altogether --which I've put off --and with the help of my cardiologist (until my atrial arrhythmia is stabilized).

* My last pair of teeth which could meet and chew have broken and most of my (remaining) teeth are infected. I've gotten good at suppressing the pain --mainly by taking a bit of Listerine/equivalent into my mouth, sealing my lips tight, creating pressure in my mouth, then vigorously swishing the Listerine through my teeth. (Possibly, that kills off the infection for a while --long enough to work and sleep well.) Proper dental repairs are simply not in a Social Security based budget. (My wife has a very old set of dentures, which she only uses for photos.)

Before they broke these molars were giving me a lot of pain, which started (mildly) about 2 weeks earlier. At first, (a Listerine type) mouth wash and an aspirin at night stopped the pain --completely. I hoped the problem would "go away" (as tooth aches sometimes do), but the time between mouth/tooth washing kept getting shorter --and I could no longer chew. The Advantage dentist worked me right in for a look-see, coated the cavity with a nano silver solution plus a fluoride sealant (that's the latest approach to treating cavities, with good reports^) and put an instant setting plastic patch into the hole --to hold me until that tooth could be scheduled for extraction. 3 months have gone by (at this writing) and the patch is still working (although several other teeth are hurting now).

^ If I recall the article correctly, this new treatment, when used to save teeth, is applied 3 times --in order to be fully effective. New tooth enamel forms (at least for young people). Perhaps a filling is used if there's a deep cavity. The traumatic experience of drilling out decay is avoided, much of the procedure can be done by a supervised dental assistant, and the costs are far less than traditional drill and fill treatments.

The silver particles (nano size, I gather) are small enough to penetrate the tooth and kill off infection. (Normally, I'm leery of nano-technology, but ultra fine ground silver has been used for ages to kill infections, with impressive results. I'm guessing it's an old byproduct of preparing silver for use in photographic film emulsions.)

Although I had high expectations for that repair, the pain came back in a few hours --and with a vengeance --and mouth wash no longer stopped it. I had to revert to what had stopped the pain of my earlier tooth aches: ice water. Until 2 O'clock in the morning, I was swishing my bad tooth about every 100 seconds. Then: it stopped hurting --!-- and I finally fell into a deep sleep. Perhaps it took the silver particles that long to penetrate to the depths of the decay and kill it.

* While swallowing aspirin helped before, it made no difference to this new pain episode. I've been both encouraged and warned against applying aspirin directly to tooth and gums --supposed to be hard on the gum tissue, but I tried it anyway --and it didn't help.)

The bill for a look-see would have been $50, but my X-ray and patch job ran the total up to $118. The extraction will probably be another $100 or so. (This was a new to me dentist, so a look-see and X-ray were certainly in order.) (Again: that tooth finally broke and came out on its own.)

** Aspirin-- At this writing (June of 2018), I've been nursing what feels like an odd heart problem: I'm fine in the morning and my blood pressure is something like 100/70. As the day wears on, however, my BP goes up and I feel pangs (not "pains", exactly) in my chest with gentle exertion (like bending over to feed the cats). By night time it felt really serious. My BPs initially hit 160/100. My primary care provider prescribed me 10mg Lisinopril pills (one a day) which helped a little, but the heavy lifter pill turned out to be the lowly aspirin. 1/2 of a regular aspirin (162mg) is reliably bringing me (almost normal feeling) relief within half an hour, and that lasts for 3 to 5 hours (or until bed time, when I must be careful not to lay on my left side). A night's sleep leaves me feeling normal again.

* In the course of taking aspirin every day (getting in to see a cardiologist is taking months!), AND having problems with my rotten teeth, I've found that the same doses are also reliably stopping my tooth aches.

Be sure you have fresh aspirin on hand. Large bottles tend to go bad, so for the little bit aspirin costs, smaller bottles seem like a good idea.

* I was starting the day with a heart attack preventative "baby aspirin" (81mg) that's "enteric" coated. While this might be the best way to take aspirin, it's slower acting. Also: recent studies have shown it doesn't really help prevent heart attacks. Regular aspirin use, however, does tend to cause excessive bleeding --and I did start developing blood infiltrations around insignificant bruises on the back of my hand --so I stopped the regular taking of low dose aspirin. (Update: I had a go-around with what the CT indicated to be a kidney stone --one small enough that they sent me home to let it pass normally --which never happened. The ER doctor and staff made no suggestion it was caused by the aspirin I'd been taking, but I have my suspicions. As noted above, I had all of my remaining teeth extracted.)

For decades I've taken the occasional aspirin to relieve stress and physical discomfort, and in order to get a nice night's sleep (running a fan helps a lot too). Aspirin is wonderful stuff, but take care not to over-do it, which can lead to intestinal bleeding --maybe even an aneurysm.

* Those oils and extracts at the health food store didn't help alleviate dental pain at all (for me), plus I ran into confusion about strengths and dilutions. (Same goes for alternative flea medicines for your dog: useless in my experience --probably unhealthy and irritating for the animal as well.) The alternative meds/supplement industry seems unable to police its own ranks.

** If you Google around (year 2018) there are interesting developments about dentists packing tooth cavities with a bit of aspirin, which leads to the tooth regenerating itself --! (I found this at Medical Daily.) The procedure is still in development --and it's not a good idea to apply aspirin to a bad tooth at home. Another article, from a Colgate (brand) web page, had it that chewing (rather a lot of) aspirin, for extended periods of time, deteriorated teeth. Well that's not surprising, since aspirin is acidic. It also irritates the soft tissues of your gums.

* September, 2019: I'm nursing the return of a nasty tooth ache (or two) which has stiffened and made pressure sensitive the flesh over the left side of my jaw. It's hard to convey notions of pain, but there's a point at which one can think of nothing else. At this point, however, I'm on the first of the (about) two hours of relief that I reliably get by taking a single aspirin (325mg) tablet --which I've been doing over and again for 3 days (sometimes getting a longer stretch of relief). This relief is close to total (just don't touch and put pressure on the left side of my chin). Most authorities will tell you that such a steady diet of aspirin is a bad idea. My cardiologist doesn't seem to like aspirin use at all. On the other hand, one of our PCPs (one of a succession of principal care providers, sometimes a Ph.D., usually an FPN) and an RN relative of ours advises an aspirin-a-day. In seeking an appointment (more below) for extractions, I made it clear what I was doing, but that met with no objections or even cautions.

Pain: * In the bad old days of dentistry (talking 60+ years ago), and having been given oral doses of a liquid iron supplement as a child, I had frequent bouts with dentists. One of those dentists was an uncle, another was a such a close friend of the family he seemed to be an uncle. Both believed that drilling teeth without Novocain "built character". I tried my best to tear the arms off the chair as the drilling and grinding proceeded. I have only to sit in a dentist's chair now and, although I be a "good" and quiet patient --the trembling starts. Once my hands shook so bad after an axraction that the receptionist had to write out the check in payment.

* When calling around this morning (9/16/2019), I found it hard to reach a human being. The one I did reach seemed unmoved by my laments, swollen stiff side of my chin, or my run of aspirin. She could fit me in 3 days later, despite that "I couldn't last that long". The two other clinics I reached had only one way to get past their phone "carousels" (numbered options, holds and transfers).  One of those systems voiced a caution that I shouldn't take the "Dental Emergency" option unless my emegency was "genuine". The other one troubled to define what amounted to an emergency: "unbearable pain", teeth knocked out/loose, and swelling sufficient to block breathing.

Noted: There seems to be no concern about swelling and bearable pain as an indication that infection is spreading beyond the teeth --perhaps reaching the blood (septicemia?). Nor do we read statistics or news accounts about people having died of their bad teeth and complications. (Does dental pain figure into suicide statistics?) Obviously: billions of 3rd world people live (however long) with bad teeth, especially in tropical climates. Knowing that helps because the pain itself is one thing, while the dark anticipation of creeping morbidity is quiet another.