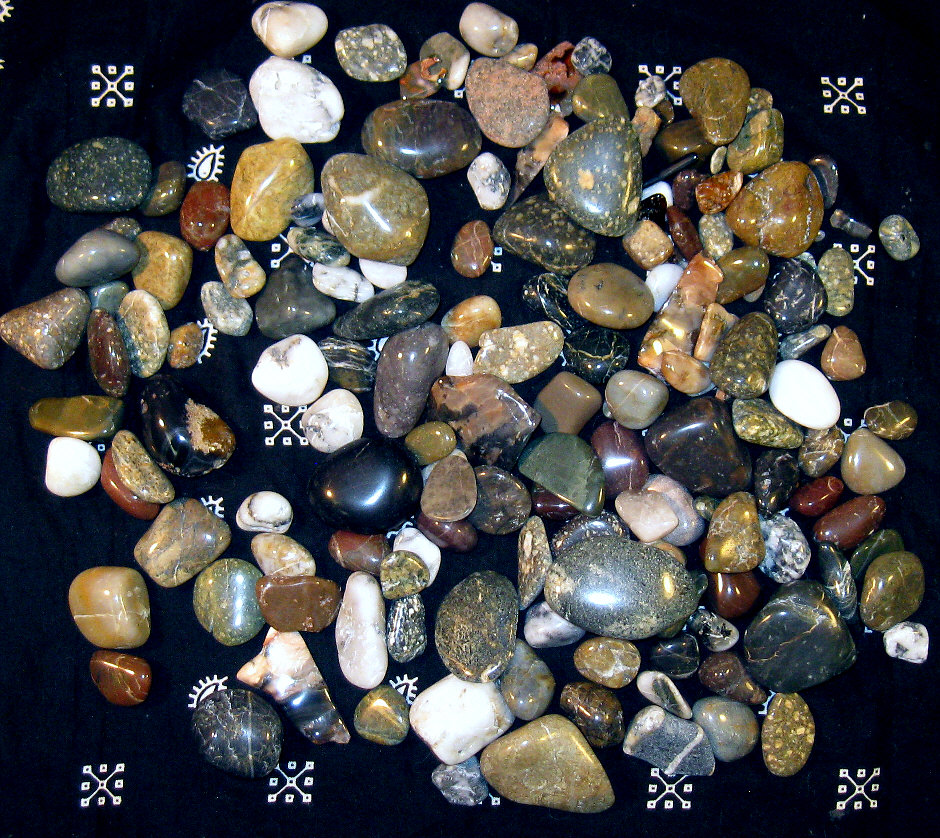 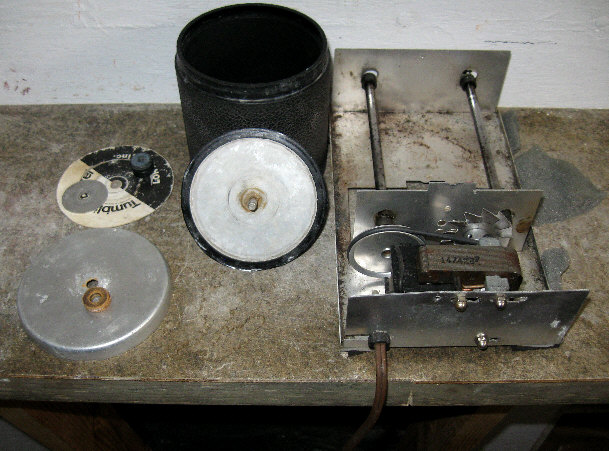 We've owned a Model 3A Lortone for about 40 years--

--and it's still a current model! We also purchased a new Lortone QT66 tumbler from a regional lapidary shop in 2010.  The main reasons we chose Lortone again were that the dealer said they all run for years, needing only oil and a new belt now and then --plus: Lortones have a belt guard (the enclosure has been removed in the above photo) --no small consideration with curious greatgrandkids poking around. Aside from a few faults (which I'll mention among the following comments), both units are running fine and I'm glad we own them.

* The enclosed motor of the Model 3A and the exposed motor of the QT66 both run too hot to but briefly touch them.  I've read and heard assurances that they're designed to run hot, but I'm old fashioned enough to keep a small fan running on both of these tumblers when they're in operation.

* Our Model 3A uses what appears to be an O-ring for a drive belt, but I've found that an ordinary O-ring won't last long.  Get the belt (and a spare) that's sold for this unit.  Make sure that the alignment and tension are reasonable.

* Model QT66 uses a good, toothed type V-belt, but my unit came with its belt quite loose.  Be sure to check the tension before you use this tumbler.  The directions for that are poor, cautioning against adjusting the belt too tight (which "leads to bearing failure") or too loose (belt failure) --but not otherwise telling you how to set the right tension.  My impression is that it should be snug enough to turn a full load of rocks, but loose enough to allow the motor pulley slip just a bit as it starts up --especially when the tumbler and belt are new.  When my belt is right I can deflect it 1/4 inch downward with light finger pressure.

I found that with a full load of raw rocks, along with water and grit (still a pound short of the QT66's rated 6 pound capacity), if the belt is too snug, the motor often didn't have enough starting torque to move.  The belt had to be loose enough to let the motor slip a little and start to turn.  Should a brief power failure stop the tumbler, you want to be sure that it won't stall when the power comes back on.  I see no mention of thermal protection/reset inside the motor --and the motor can cost $52 to replace.  (After our tumbler ran for a few weeks, the stall problem never recurred.)

* These tumblers are often supplied with 4 grades of grit through polish, or a similar package is sold separately. While you might have directions from elsewhere (perhaps included with another brand of grit) --to mix in a teaspoon of detergent, take careful note that Lortone tells us to use only water with the grit, and only "pure soap" for the one-day burnishing stage.  The additives used in common detergents and soaps might attack the pure rubber used in Lortone tumbling drums.

** Unfortunately, the Lortone recommended "Ivory Flakes" or "Ivory Snow" seem to no longer exist, and the liquid replacements for them appear to have additives --as does today's bars of Ivory hand soap. Never-the-less, my dealer said to use Ivory bar soap shavings --instead of the long gone Ivory "Flakes" and "Snow" products.

* The first stage with #1 grit should be loaded 3/4 full, since so much rock gets ground away.  I add water to each load so as to be just short of topping the rocks. (A half load of ground down rocks plus plastic pellets when polishing will return the tumbler to being 3/4 full.)

Although we're instructed to load these tumblers to capacity (3/4 full), our experience with lighter loads has been good. Simply proportion the grit and fill with water so as not to top the rocks.

* All the instructions I've seen advise to use large amounts of grit, then run your tumbler continuously for a week (losing perhaps 20% of your rock volume to the rough grind).  However, I've found that about 10% as much grit works well in the little Lortone 3A. That's only one rounded teaspoon instead of 4 level tablespoons. I can get good results by the 5th day, but it's best to run it for a week --to be sure. (I've only worked rocks harder than the 5.5 moh pocket knife test, so softer rocks might time out differently. Don't mix hard rocks with soft rocks.)

* After each grade I pour the tumbler's contents into a large strainer, always working outside with a garden hose. I wash the tumbler, wash the rocks under running water --and then again as I return them to the tumbler by small handfuls. The wastes go into a small pit --which I keep covered when not in use.

* After finishing with the #3 grit and cleaning up, I do a 6 to 24 hour tumble with plastic beads and "Ivory flakes"^ soap (no longer available, so see my foot note) --to scour the rocks (and plastic) clean.

* After that run I pour the contents out into the large strainer for a good wash-down, returning both beads and rocks to the cleaned tumbler. Then I add polishing agent, water, and run for 5 to 7 days.  If they come out at all dull, do another wash-down and then a "burnishing" run for 5 to 7 days, using just Ivory flake^ soap and plastic beads. (Again: be sure there are no soft rocks mixed in with a hard rock run.)

* I have a suspicion that a light charge of rough grit could be left to turn for a month (perhaps filling 2/3rd full and adding extra water to 3/4 full) and the rocks would come out pretty nice.

* Lortone tumblers are supplied without an on-off switch --which tends to keep your hands away when it starts up. However, I added a receptacle strip with a switch --which turns the tumbler and the cooling fan on and off together.  From time-to-time (especially with a new belt) I'll snap the switch several times to make sure the tumbler will restart reliably in case of a power interruption.

~ Consider a computer type "UPS" (uninterruptible power supply), should your tumbler tend to stall upon starting.

~ Consider also only filling the tumbler half full (or less) for the rough grind. I've done well with light loads. Perhaps the notion that it won't grind properly with a light load is more blame-shedding legend than fact. (Experiment!)

* Cleaning both rocks and tumbler between stages with running water seems adequate --perhaps even for the transition to polishing and then to burnishing. Again: clean up outside. A running hose and a big kitchen strainer works fine for all stages.  Do not send the slurry down your drain, and don't allow pets/animals to lap up the slurry. Dig a small drain pit in the ground and put a heavy cover/flagstone over it when you're finished.

** The Lortone tumbler canister's cover arrangement makes no sense to me.  While the inner rubber-covered lid makes an excellent seal (and I suggest you seal it wet, pulling the tumbler's rubber clear as you push the lid's rubber down-around), tightening the knob then pulls the lid back up, and if you don't make model 3a's knob pretty snug, rotation unscrews it.  The obvious solution is to place several 1/4" washers over the stem between the inner lid and the metal cover, such that the washer stack ends up flush with the top of the closed tumbler. I used 4 washers for both tumbler models.

^ * Again: I was unable to find "Ivory Flakes", although I remember that product. The Lortone instructions caution that the additives in regular soaps might attack the tumbler's rubber. I asked at Usrey's Rock Bin (Lakeside, Oregon) and the man said to simply shave off some Ivory bar soap with a potato peeler

~ Surely there's no need to shave the soap. I just cut off a piece about the size of my little finger under the nail.

~ I doubt there'd be any difference, but I'm trying both Ivory and Kirk's Castile bar soap, going with the latter if they both work okay. I don't know how pure Ivory Flakes use to be. It was sold as the gentlest thing in which to wash delicate fabrics, which is what "Kirk's Castile" soap is sold for as well. Nor do I know how pure "99-44/100% pure" Ivory bar soap use to be --but it doesn't appear to be so pure now-a-days --per the following lists of ingredients:

* I tried polishing with cerium oxide. The results didn't look as good as with the "JBFC" kit's polishing agent. (I suppose that was sold to us by Usrey's Rock Bin --can't remember, and I don't know what its white polishing agent actually is.)

Here's the format I use for a tumbling log: PDF