What happens when one weighs a given mass at the North Pole?
(instead of, say: Topeka, Kansas.) 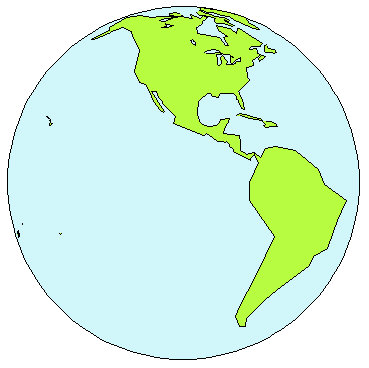 My take on this question: it might weigh a bit more at the pole (using a spring scale), but only because it (might) weigh a bit less when it's closer to the equator (due to centrifugal force^).

* Unfortunately, no less than the Encyclopedia Britannica (2008), Microsoft's Encarta (2005), plenty of other sources and individuals --and even a recent reference I've seen from Cornell --have it that an object weighs a bit more at the north or south poles because it's then a bit closer to the center of the (slightly flattened, oblate spheroidal) Earth. This misunderstanding is understandable --since objects weigh ever less as they're rocketed away from Planet Earth, which is calculated on the basis of distance from the Earth's center (of gravity).

Consider the familiar and intuitive understanding of what happens when one mis-steps into a deep hole (airless, for the sake of this discussion) --deep enough to pass through the center of the Earth.

Let's imagine a hole/tunnel which runs from the North Pole to the South Pole. As soon as you start dropping down below the the surface, gravity begins to diminish.

At first you descend at an accelerating rate of one "G" --which means your downward velocity increases by 32 feet per second --each second, but gravity diminishes to zero as you approach Earth's center (and maximum speed). Thereafter the growing force of gravity in the opposite direction decelerates you --until you just reach the surface at the south pole. Your pole to pole trip will have taken about 45 minutes --similar to that of an astronaut in a very low Earth orbit. (Shades of the old Firesign Theater episode: "Rebus Kniebus"  :-)

More on hole jumping at: http://hyperphysics.phy-astr.gsu.edu/hbase/Mechanics/earthole.html 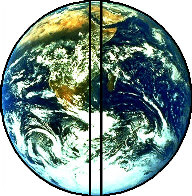 So: what happens if we squash the Earth down yet further --perhaps until it resembles an old fashioned phonograph record --and then try to explore gravity near and in the hole?

** It really bothers me that I stand so alone in my thinking on this --seemingly simple issue. I've been unable to move anyone via my own presentations, so an appeal to authority is in order. Potent opinions (either way) will be most welcome.

~ I wrote to NASA, which returned a form letter listing their standard library access URL, how to get automated updates and such.

~ Then I wrote to the US Geological Survey, getting a nice personal response from one of their cartographers. While he deferred to NOAA for further opinion, his working assumption was the same as my earlier references: that any slight difference is due to the radial distance from Earth's actual center of gravity. In his opinion, centrifugal force (as one approaches the equator) has nothing to do with it.

~ So next I wrote to NOAA's Communications and Outreach Branch, but after 3 months: no response.

~ My local library accesses something called "Answer Land", which is supported by a network of good hearted volunteers. It's probably mostly for kids, but I should give them a try. This hole-in-the-Earth talk and the level on which I'm dealing with it does seem like kid stuff.

^ Hmmnnn: I'm not so sure of there being a centrifugal force difference either. What bothers me about the centrifugal force explanation: since the Earth's oceans and other matter can and do redistribute (which must be why the Earth is an "oblate spheroid") --I'd expect there to be an "equal but opposite" response to the Earth's spin --such that gravity (aside from local variations due to irregularities like mineral deposits and mountains) would end up fairly the same everywhere. In other words: there should be more matter in the nadir direction under your feet at our somewhat bulging equator --just enough to counter-act centrifugal force --right?

I've read accounts of geodetic expeditions around the Earth from my copy of the 1911 edition of the Encyclopedia Britannica. Deducing the shape of the Earth was cutting edge back then and the math presented in that article is formidable. This is the research and analyses of scientists who personally checked out this gravity and weight difference business. No doubt there's some sort of a "gravity chip" nowadays, but I relish the pendulums, measuring chains and theodolites of those old timers. (No thanks, however, to hacking my way through the wilderness with one of their teams.)