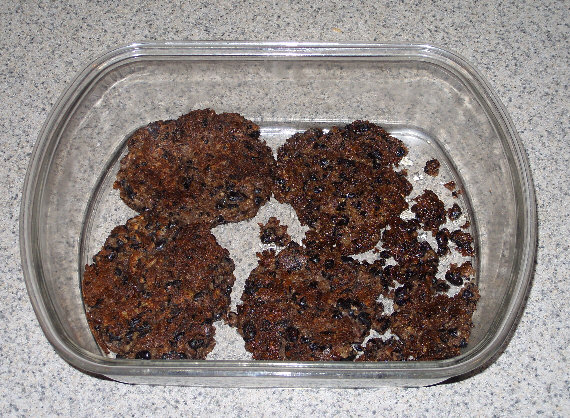 You're looking at the bean burgers. 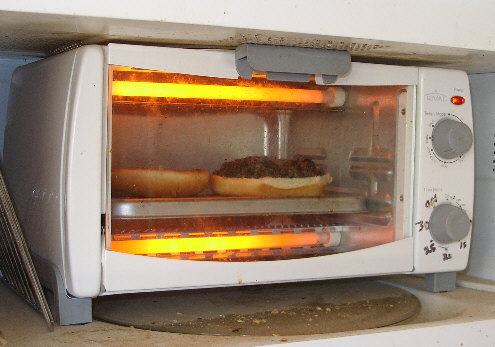 Here's what to do with a cold one (5 minutes) --and note the toasting bun.
(The first batch tasted fine, with ketchup, but somehow, my wife did not like them^ --so I ate hers too.)

^ It was a different story for the 9/4/2018 batch. She at first refused to believe the burgers were made from our (new improved) black bean recipe. Today (5/26/2019) she again pronounced her bean-burger "good" --quite a compliment --coming from her.

* These beans and burgers are filling --and some say: bloating, so best eat no more than two the first time. (If no one in your house ends up liking them, best not give them to your dog. Folks 'round here say that dogs bloat badly and get into trouble with beans.)

* Earlier I tried ladling hot beans from the pot over baked, buttered, salted and fork mashed potatoes (still in the peeling/shell). That was good enough that my wife also ate a helping --but I like the burgers better. Next I'll try beans and butter on our home made oat bread. (Later: yup, that was good too.)

* We've long known that eating red meat is bad for you and bad for the planet --despite that it's affordable and good tasting. We also know that off-the-shelf or vegetarian restaurant Yuppie food substitutes are both expensive and not without questions. (Soy? GMO? Need good teeth to eat it? Got $9.00 plus tip for a sit-down vegeburger?)

** What's really needed is a McDonald's style, fast food, drive-through vegeburger (--but with far fewer choices, lower prices and a drive-up reader menu --before you get to the speaker).

* Failing that, here's some DIY, starting with OLD bliggety blaggety black beans --beans which have been sitting on our pantry shelf for at least 20 years --so your new beans should work fine. We've still got 24 quarts of the dang things.

* Why black beans? Because they're supposed to be one of the most nutritious and protein laden plant foods available --to help keep vegetarians from starving to death. They don't taste like much, but with enough onions^, salt^, fat/butter^ and sugar^, even an old pair of socks can taste pretty good.

^ Anything worth eating has one or more of these ingredients, so deal with it.

First off: let's hear from some experts --the kind of folks who write books and post web pages.

* We start with what should be the last word --from the venerable Ms. Aliza Green, who wrote The Bean Bible (copyright: 2000). Unfortunately, she doesn't take a firm position on the very first issue of black bean preparation: whether or not to soak-wash them. She does, however, present ample opinions for and against, while making it clear that her practice is to soak beans --especially old beans --and at length.

* Soaking is said to remove indigestible "oligosaccharides" --the stuff which make people phart. To make soaking work, you need to change the water 3 times during the soak period plus a rinse between changes. However: urban legend has it that many folk's digestive systems soon gets use to the challenge of unsoaked beans.

* OLD beans and most store bought beans are said to need soaking in order rehydrate and cook evenly (if not be soak-washed as well). Really old beans can take 12 to 24 hours --which might result in fermentation --which is headed off by cold water rinsing and water changes. (It's implied that fermentation is not a good thing --hmmnnn: but might it help with digestion? Might it lend an interesting sour taste?)

* Some chefs, however, do not presoak-wash beans, saying it flushes away minerals and flavor. Yes: they cook their beans in the soak water --or maybe they slow-cook, such that the beans are simultaneously soaking. This is the method used by the indigenous peoples who dwell in the region between Central and South America ("MesoAmerica") --as we learn from Fast Vegetarian Feasts, by Ms. Martha Rose Shulman (1986).

* In the interests of experiment and simplicity, and before discovering the "Food Lab", I washed my OLD beans in a colander, but I didn't presoak or further wash/rinse them --any need for which was obviated by using a very slow cooking crock pot. After eating at least 3 cups of the finished beans (mighty good!), I experienced no "digestion" problems (oh: social ruin!).

But --stop the music! :-) At the web site for "THE FOOD LAB", (sub-titled: "Unraveling the mysteries of home cooking through science"), the oddly named J. Kenji López-Alt --holds forth with what is surely the last word (or 2 words) on soaking beans: "Don't bother". Take the link and learn his why.

Yes: my old beans were a long time a-brewing: about 12 hours. I made a double batch: 2 cups of washed black beans (plus all the other ingredients) in a "slow cooker" set to "low"; another 2 cups in a medium enamelware pot placed in a 210 degree (Fahrenheit) oven. The oven pot finished first (my wife pronounced upon bean softness), so next time I tried our slow cooker on its "high" setting and that worked fine. (There's no "medium" option on our bargain cooker, just "keep warm", "Low" (154 watts) and "High" --rated at 250 watts of power. I checked it at 231 watts.)

* Another issue is when to add the salt --and how much. Some say to put it into the cook pot straight away and even into the pre-soak water --in order to preserve the bean's skin and integrity. Others say to wait until half way through the cooking period or even after, since you want the beans/cellulose to get soft. This is also said to help with "digestion". So: I stirred it in after the beans were done, then simmered for another hour.

To Make a Pot of Beans: The Recipe (using the no pre-soak method):

> If you've got one: a shaggy ham bone (the bigger the better). If not: another 2 Tbsp of butter. If yes, see below.

> a jalapeno -sliced and seeded

* Cook in a slow cooker, stirring occasionally --first on the "high" setting until it boils, then back to a "medium" or "Low" simmering heat for a total of 8 to 12 hours, or until the beans are agreeably soft.  (My "High" is rated at 250 watts and it took over 3 hours to start boiling.) I then went to the "Low" setting (154 watts), at which level it continued to simmer and bubble. (I have no "Medium" setting, just "Keep Warm", "Low" and "High".)

* After the beans are cooked, add

> A cup (packed) of brown sugar

> If you've got any: a big handful of diced baked ham.

* Stir, then cook/simmer for another hour.

* You can eat some now and/or cool the crock pot (set it in deep water in the sink for a while, then into the fridge).

* If you added a ham bone, the chilled beans will have a layer of congealed fat on top. Use a big serving spoon to skim most of it off (just the grease) and discard it.

* Reheat the chilled beans, scoop them and the diced ham out into bowls, top with a pat of butter. (Tastes good!)

Now you can make those bodacious, end-of-the-world Bean-Burgers:

* Put into a flat-bottomed mixing bowl: 2 cups of well drained, cooked black beans (per the above recipe), along with a good representation of whatever's been cooked with it (onions, spices, mushrooms), 3/4 cup of all-purpose flour (add 1/4 level tsp of xanthan --if you use a home-ground, non-gluten flour), 1 heaping teaspoon of seasoned salt (something like: "Lemon-Pepper"). Add in 1/4 cup of brown sugar (packed). (My first batch was without sugar and it tasted pretty good.)

* Mix the ingredients together --which might/should look rather dry, but it gets more moist as the beans blend in. Rapid stamps with a potato masher should get it, but no big deal on the mixing. The burgers taste just as good with plenty of black beans still showing.

If your bean glop is on the moist to watery side, that's okay. The xanthan might take up excess water after a short while, or you can just slow cook it dryer.

* Put cooking oil into a frying pan. This bean concoction ends up oil thirsty, so start with plenty. Maybe you can't afford enough "extra virgin" olive oil. I ended up with Mazola ("good for the heart" --says so right on the bottle). (That's the oil we popped popcorn in, before going to an air popper.)

* Turn up the heat until the oil is hot, run the heat back to med-low and lay in your bean glop as patties --no more than 1/2 inch thick, so that they cook firmly through. You'll have to scrape them off the pan (with a plastic spatula if you're stuck with a "non-stick" pan) and turn them over a couple times in order to keep oil under the patties.

* Frying goes pretty fast, since the beans have already been cooked. Fry them until both sides look (umm) "cooked". (No blacker --is bad for you.)

* Good gosh(!) but this stuff sticks to a hot, well oiled pan, even after the first turn-over. Best not fry the patties too hot. (Just soak the pan in water for a while and it will come clean.)

Stop wasting your life --and get a steamer. 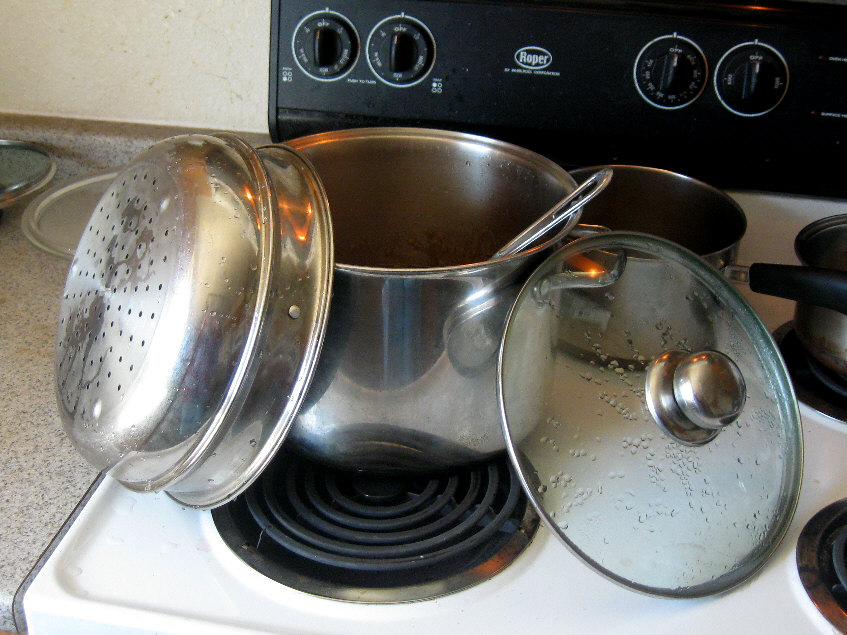 Make that two steamers: a large one (photo) and a smaller one.

* Eggs ala Goldenrod: Grandma and Mother would make me this Swedish delight. (Recipe in essay format --sorry.)

~ In a sauce pan just big enough to cover a 6" (electric) burner (get rid or your old gas stove --before it gets rid of you), pour in a cup of milk (2% or 3.5%), add a tablespoon of butter and a level 1/4 spoon of salt. Heat that on medium and stir occasionally with a flat ended spatula until the butter melts. Have bread slices waiting in the toaster. (Big hamburger ["Kaiser"] buns are nice too.) Also, have a small, coarse strainer and 2 large hard boiled eggs standing by: peeled, yokes separate, and the whites cut up into small pieces with your kitchen scissors. With the milk hot (not yet bubbling), gradually stir in (with that spatula) a rounded tablespoon of "all purpose" flour --which will thicken up as the sauce starts to bubble. (Keep stirring, keeping the pan's bottom clean.) With the sauce nicely thick, turn the heat way down and add in the diced egg whites. Plunk down the toaster's bread slices and stand by to butter the toast. Have the yokes waiting in that small coarse strainer. Butter the toast, cut it up on two small plates (keep a move on now), ladle on the egg white sauce, use a large sturdy spoon to force the egg yokes through the strainer --to fall on top of the egg white sauce (scrapping the strainer's underside to get nearly all of it). (One can also gradually add the milk to the flour. The sauce will smooth out either way --with enough stirring. A flat ended spatula is key --here and with much western/saucepan cooking.)

"Italian Spaghetti": Actually, more like a hot dish --using elbow macaroni/whatever and a can of chili.

Oat Bread: The real deal here --not half glutinous "bread flour", like most other recipes.

Bird Bread: What to do with all that old buggy flour you've been hoarding and putting off using.

Lentil Stew: This started out trying to be soup --and I do include a soup modification.

Broccoli: Break off the florets and stems into the steamer's colander, bring the steamer pot's water to a boil, put on the colander and cover, steam the broccoli for 12 minutes: nice and tender. (If you steam it for "6 minutes", like it says elsewhere, provide your gathering or family with spittoons for the stems.) Serve cut up with several pads of butter, liberal salt, black/table pepper, shake on some parmesan cheese, and add a side of mayonnaise to use as a dip.