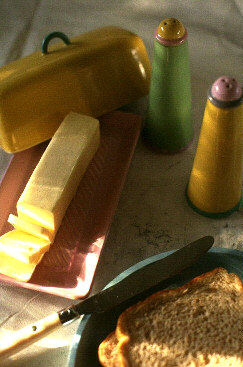 -
Hopefully, you'll like or develop a taste for this rather heavy bread.
(The Recipe)

I've long thought that a really good loaf of bread is enjoyable in and of itself, spread with butter, or toasted and buttered. My wife likes our oat bread those ways, but in my opinion, our oat bread fails the first two tests. It's only okay when warmed up in the toaster. (Use the darkest setting since, given its density and water content, this bread refuses to actually toast.)

It's also poor bread to make a sandwich with, since it tends to break and its bulk dominates what's in the sandwich --unless you make a single slice "open face" (non)sandwich.

* So how do I prepare a slice(?) --with peanut butter and strawberry jam(!) and lately: with home made black beans.

Now --I can hear you saying that an old pair of socks tastes pretty good with enough peanut butter and jam, but this bread isn't just a vehicle for such spreads, it nicely compliments what you trowel onto it (and you want to go heavy, since this bread is heavy). One slice is a light meal.

* Why do I like it so much? --That's a question I ask myself. Is it simply because we spent 3+ years developing the recipe? All I know for sure is that we^ do/did like it, and even after having made over 100 loaves, there was a sense of "withdrawal"  :-)  --just a few days after killing off our last loaf.

* Part of the reason for this recipe is to make a good loaf of bread with little or no gluten and no wheat. Although health arguments can be made against modern wheat varieties, we're not wheat/gluten fanatics and we're certainly not "celiac". We partake of conventional breads at others' homes, around town and even at home (especially via commercial bakery goods).

Moreover, we admit (and succumb) to the alluring baking aroma and taste of wheat breads.

* As noted in the recipe (download it as a PDF), this bread is a departure from normal bread, normal bread making and bread keeping. Since it has a high moisture content, you want to keep it in your fridge --in a plastic bread box with a loose lid, but let it air and cool at room temperature first, and it might need another dry-out session on your kitchen counter the next morning.

Unlike gluten based breads, I don't sense that refrigeration makes it tougher (than it already is). (Refrigeration is a good idea for many home made breads.) (A better idea for any bread is to "eat it now".)

* "Xanthan" is added to replace the missing gluten --plenty of which is in gluten heavy "bread flour", but there's not quite enough of it in natural wheat flours --which tends to result in a heavy loaf.

* Although much more xanthan is often called for in recipes, I find that more than a level teaspoon per 4+ cups of flour results in a rather tacky loaf --which sticks to the bread knife. (Even at one teaspoon, it still sticks to the knife a bit when the loaf is still hot, so cool it before cutting.)

* Consequently, this oat bread doesn't "fluff up" like store bought bread and a loaf weighs over 4 pounds. (Don't drop it on your foot  :-))

* Should you want to make conventional, fluffy "wheat bread", "rye bread", "sorghum bread" etc, be advised that in such recipes, the name-sake ingredient is in the minority. The chief ingredient is high gluten "bread flour". Alternatively, the recipe might be 25% "gluten flour" --which is even more glutinous than bread flour.

I accidentally made a loaf of bread out of pure gluten flour. It looked (and smelled) like a classic, beautiful loaf of wheat bread.  Had I shaped it like a big donut, it might have made a good tire for our wheel barrow.

* Per the recipe's description, you're making more of a self-leveling thick batter than bread dough. If you're using a bread making machine (very affordable at the Salvation Army or a Goodwill store), you'll see a mound over the kneading paddle/s, rather than a dancing dough ball.

* Our bread maker (and we recommend it) is a programmable "Zojirushi" model #BBCC-X20. Look for this brand's logo: an elephant. However, probably any bread maker will work by using its "basic" cycle.

* Initially, you should stand by with a rubber spatula for when the kneading starts (right after the "pre-heat") since xanthan batter at first wants to crawl up the sides of the bread pan. After it's all evenly wet, however, the batter will behave.

* Although more than the initial kneading probably isn't necessary for xanthan based bread, the subsequent beat-downs and rises won't hurt.

Then there's "Bird Bread", which uses up rummy old flour and stuff ground into flour. (We also make popcorn for the sea gulls and crows.)