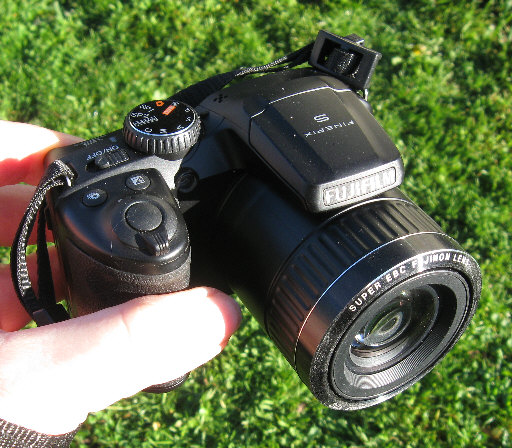 * This is a 5 star review and I was glad of my purchase. (Besides: I have a soft spot for Fuji on account of their W3 stereo camera --and for keeping us in good film for so long.)

* At any given zoom setting, the S4800 has (to the best of my knowledge) only one f/stop: wide open. The exposure effect of a smaller f/stop is achieved by inserting a neutral density filter. That's a good thing. Any reduction in aperture (ie: going to a higher f/stop number) would degrade the sharpness of the image. Here's why:

At best, yesterday's film cameras (nice ones that you'd buy in a camera shop) were understood to image 20 micron details (8/10,000 inch, or about 25 "line pairs" per millimeter), using practical films and depth-of-field tables. The design criteria for lenses and depth of field scales were often based on an assumed "least circle of confusion" measuring 1/1500th to 1/1700th the diagonal of the film format (same as the focal length of a "normal lens"). That's 43mm for a "35mm camera" that shoots "full" film frames --which works out to a 25 to 29 micron diameter circle of confusion.

The pixel spacing for today's common, affordable cameras is often less than 2 microns (!) but the physical nature of light dictates that its typical f/3 (f/2.8 for grandpa's camera) lens tops out at 4 micron wide details (but resolution test pattern's line pair bars tend to resolve significantly better). If you then "stop down" to (say) f/6 (f/5.6 in grandpa's denominations), you're supposed to get only get 8 microns details (due to the "diffraction limit") --maybe 4 times the sensor's pixel spacing and clearly at the end of the useful aperture range for low end, small sensor, digital hand cameras.

But: you don't need those higher numbered f/stops for "depth of field" --at least, not until you start using serious amounts of zoom (and then you usually head toward a higher f/ratio anyway).

Depth of field is no problem for today's digital cameras when used at normal to wide angle focal lengths. That's because the focal length of the camera's lens is so short (say: the 5.8mm of my Canon A590 --compared to the 58mm normal lens of my old Minolta SRT-101 SLR 35mm film camera). To the SRT-101, 10 feet away is about 52 times the camera's focal length, but the A590 sees that distance as 520 times away --a rather "infinite" distance.

Affordable digital cameras give us two miracles: 2 micron resolution sensors and zoom lenses which can image near that much detail.

In my tests of the S4800, I realized a "line pair" (alternating black and white bars) limit of 6 microns (3 microns per bar) at f/4.3, and 4 microns per bar at f/5.9  --which is terrific, plus there was surprisingly little light scatter/halation in the image.  At the f/3.1 wide angle setting I could actually make out test target line pairs as close as 1.34 microns --the sensor's pixel spacing!

For general shooting, I found the best mode to be "Program AE" with an automatic ISO range limited to 400, biased at minus 2/3rds of a stop (so as not to blow highlights).

Other Pros: ** AA batteries --and your choice: NiMH, Alkaline, Lithium, with settings for all 3!

** A good anti-reflection surface on the viewing screen --but still not good enough.

Cameras should not be marketed without optical or equivalent electronic viewfinders. Screen viewing cameras work fine for indoor, studio photography and for shooting from inside a car or a blind, but not in direct sunlight. 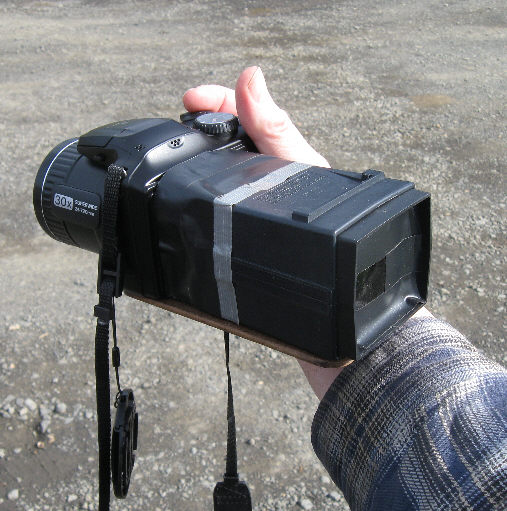 * What we did with our Fuji S4800 was to build a detachable rear plastic viewing hood/box with an eye lens in the back --which resulted in the best electronic viewfinder I've ever used. (I suggest a minimum eye lens focal length of 4 inches.)

** Although marketed as a still camera, in my opinion, this camera shines when shooting video --even when hand held. The exposure does better at capturing scenes with specular highlights (ocean waves, say) and the fully extended 30x telephoto setting is worthwhile (especially if tripod mounted).

Other Cons: ** The enclosed DVD had the right legend, but contained the wrong digital manuals (and, presumably, photo access software) for this camera, so I downloaded the right manual. (I never use the comes-with silly-ass camera software anyway and I don't know anyone who does.)

* Pre-assembly on the camera strap was wrong and looked (to me) like it would slip after being correctly attached --so I secured the strap ends with a spot of Gorilla glue.

* "Be sure camera is off when loading batteries" --but the switch is a momentary toggle (!) so you don't know.

* There's no comes-with memory card --not even a low capacity cheapy.

* This camera would not appear as a file manager accessible drive disk with either an XP or a Vista operated computer --unless you use Fuji's comes-with photo software, --or: simply remove the SD card and stick it in a "thumb drive" USB adapter module.

* The battery compartment door was the weakest part of our last digital camera and I worry about this one being able to endure through many openings to access its SD card. I'm being careful.

* Whether the self-timer was used or not doesn't appear in the EXIF list.

* It has a fursluginer micro size USB jack.

* I got the impression that this camera sometimes fails to fully focus, so rap off some backup shots if you can.

* What I most wanted to add to this camera was a "sporting sight" which presents a wide view AND an indication of what the 20x to 30x field is --since it's almost impossible to track and shoot moving subjects at that zoom range.

*** Our S4800 camera lasted one month  :-(   Someone grabbed the camera to catch a shot, but forgot to remove the lens cap. Instead of responding to the warning to turn the camera off and remove the cap, that person instinctively pressed buttons to get results. My best guess is that the internal zoom gearing is either jammed or stripped. (I can't fault who did that. I came close to doing it myself a couple times.)

* In the case of the S4800, I don't believe that attaching the lens cap captive to the camera strap was a factor, since the jamming occurred before the lens was able to extend. (Poor design!)

Speaking of Mavicas: our 14 year-old, 10x internal optical zoom (at a constant f/2.8 !), image stabilized MVC-FD97 Sony Mavica --is still going strong. It only captures a 2 megapixel image (1200 x 1600), but its sensor pixel spacing of 3.36 microns is supported by a theoretical 2 micron lens resolution --and at any zoom setting. (The lens isn't that good, but I like its smooth rendering.)

Other fixes, adjustments and observations:

** You may be disturbed to see exposure information indicating that you're shooting at f/8, f/11, or even f/20(!). Again: these are only equivalent f/stop light values with a neutral density filter flopped into the light path. Rest assured: the lens is wide open --which is (again) a good thing.

* Buy and apply protective screen film (as we do for the screens of smart phones and PDAs), since the S4800's viewing screen turned out to be very liable do abrasions and scratches. (Until you get protective film, use a close fitting plastic freezer bag [leave it open] to protect the camera and carry it around in a soft lined camera bag.

* Turn off the (just taken) image review feature --which I found to be disturbing and rattling in the extreme when trying to closely space a number of shots. That way one sees a black screen for about a second.

~ Turn off the fixed screen information (which you get to see plenty of anyway).

~ From that half-depressed state, shoot --enjoying almost no shutter delay.

~ Wait out the 1+ second black screen, after which: more exposure information.

~ Wait through 2 seconds (!) until the unwanted, fursluginer exposure information goes away --

~ And only then --repeat the above for another exposure.

~ If you get right on it, half-depressing right after the information goes away, the wait period is about 2 seconds.

~ With the info off, I'm able to take a photograph about once every 7 seconds.

~ With the information on, I can get it down to about 3 seconds, maybe 4 seconds if I care about when the shutter trips. (Note, however, that this camera has "Continuous" shooting modes which can space shots about a second apart, which includes an adjustable exposure bracketing option.)

* Set the image sharpening option to "Soft" --which apparently means "no sharpening". The "Standard" setting adds too much "ring"/highlighting hype to edge details to suit my taste. We can always add any needed (and gentler) sharpening/crisping later on with a graphics program. I could see no loss of actual resolution with the soft setting.

* My impression is that the S4800's manual incandescent white balance setting is suitable for modern halogen bulbs, but the correction isn't strong enough for standard incandescent lamps. The camera does better when set to the default of auto white balance.